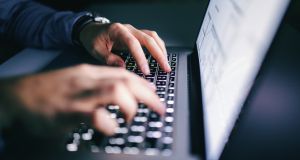 A “legally admissible” code would allow issues covered by the code to be referred to the Workplace Relations Commission. Photograph: iStock

Bank workers are urging the Government to go further in giving workers the ‘right to disconnect’ from out-of-hours contact from their employers through smartphones and other devices.

The Government plans next month to sign a “legally admissible” code of practice for employers on the issue, according to Leo Varadkar, the Tánaiste and Minister for Business.

However, the Financial Services Union (FSU), which represents workers in the financial services sector and which has pushed for the right to disconnect, wants the Government to make the code more legally robust.

A “legally admissible” code would allow issues covered by the code to be referred to the Workplace Relations Commission (WRC). However, the adjudications of the WRC would not be binding or legally enforceable. The FSU has written to Mr Varadkar asking for an upgrade of the planned code in this regard.

“We believe that if the code of practice is really going to help hundreds of thousands of workers it must be legally enforceable,” said Gareth Murphy, head of campaigns, and industrial relations with the FSU.

“If it is not legally enforceable it will allow the worst culprits of the ‘always on’ culture away with continued exploitation of workers.”

The FSU surveyed about 1,300 members this month and 95 per cent want a legally enforceable code, the union says. The FSU believes an amendment to the Organisation Working Time Act would be enough to make appeals of breaches of the code legally enforceable on employers.

The right to disconnect from out-of-hours emails, calls and texts was established in France in 2016. FSU has been campaigning on the issue for several years and the Government committed to adopting it in 2019.