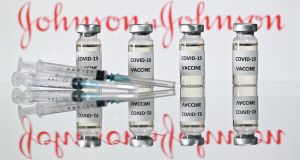 Johnson & Johnson’s Covid-19 vaccine is safe and effective, US regulators said, a key milestone on the path toward approving access for the first such shot to work in a single dose. Photograph: Justin Tallis/AFP via Getty Images

Johnson & Johnson’s Covid-19 vaccine is safe and effective, US regulators said, a key milestone on the path toward approving access for the first such shot to work in a single dose.

The vaccine was 72 per cent effective in a US clinical trial, Food and Drug Administration staff wrote in a document summarising the company’s trial data, confirming findings J&J released earlier this month.

There were no Covid-related deaths in the vaccinated group, the staff wrote.

Agency officials prepared the document ahead of a meeting on Friday where external advisers will make a non-binding recommendation as to whether the vaccine should be authorised.

The European Medicines Agency is expected to decide on approval for the vaccine by the middle of March.

The US analysis supported a favourable safety profile with no specific safety concerns identified that would preclude issuance of an emergency use authorisation.

Vaccines from Moderna and the partnership of Pfizer and BioNTech were authorized by the FDA in December, just before the first major coronavirus variants were seen in the US.

Since then, mutant versions have become a major concern, and J&J’s vaccine has been found to be less effective in South Africa and Latin America, where two quickly-spreading versions were identified. Another variant that first arose in the UK, called B.1.1.7, has been seen at even higher levels in the US.

If J&J’s shot is quickly authorised after Friday’s advisory panel meeting, as the other two vaccines were, the company will initially be able to provide four million doses, according to Richard Nettles, vice-president of US medial affairs for J&J’s Janssen Infectious Diseases and Vaccines unit.

Speaking in a Congressional hearing on Tuesday, Mr Nettles said J&J will likely produce enough of its one-dose vaccine to inoculate more than 20 million Americans by the end of March.

The company’s contract calls for 100 million doses delivered by the end of June.

Unlike the Moderna and Pfizer-BioNTech vaccines that require two doses given three to four weeks apart, J&J’s shot can be stored at refrigerator temperatures for up to three months. J&J’s vaccine is made from a cold virus that doesn’t replicate but helps the body develop an immune response and prepare for a Covid-19 infection.