B&Q suppliers to get 10% in rescue plan 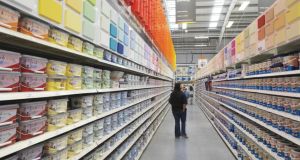 Suppliers are being offered 10 per cent of the €3 million due to them in the proposals to rescue DIY chain, B&Q, which has been under High Court protection from its creditors since January.

The High Court appointed Declan McDonald of PricewaterhouseCoopers as examiner to the Kingfisher plc-owned chain in January in a bid to rescue the business which was heading for a loss of €20 million this year and was crippled by excessive rents.

The rescue plan drawn up by Mr McDonald proposes that suppliers accept 10 per cent of the amount due to them in settlement of the debt.

The figures show that trade creditors, who are treated as a specific group under the proposals, are owed a total of €3.3 million.

The document also proposes that B&Q’s main creditors, its parent and associated group companies, will not receive any of the €22.4 million due to them.

At the same time Kingfisher will put €2.4 million back into the business by way of an equity investment.

This cash will be used to pay the examiner’s costs, the 10 per cent due to trade creditors and to provide working capital to the company.

Preferential creditors, including the Revenue Commissioners, who are owed €1.9 million, and a number of local authorities, will receive 100 per cent of what is due to them.

The creditors affected voted in favour of the proposals, although the document shows that only a narrow majority of the 80-plus suppliers affected supported the deal.

At the time that the court appointed the examiner, Kingfisher indicated that it was willing to invest further in the group, provided that it was restructured.

Mr McDonald’s figures show that if the business were wound up, there would be just €6.3 million available to be distributed to unsecured creditors owed a total of €81.1 million, leaving a deficit of €74.8 million.

The large bill due to unsecured creditors is partly due to the fact that the amounts due to the parent and other group companies, along with a number of other large liabilities, are included under this heading.

The High Court has to approve the rescue plan before it can go ahead, and it is open to any creditors whose rights are affected to challenge the scheme if they can show that they would fare better in a liquidation or receivership.

The group’s rescue plan will involve closing its Waterford outlet and the loss of the jobs there.

Its Athlone store was also facing closure, but the group arrived at a new deal with the landlord of this outlet that allowed it remain open. Had both stores closed, job losses would have totalled 92.

The group had no bank debt at the time it was placed in examinership.