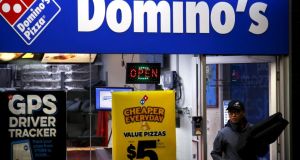 A worker carries a pizza for delivery at a Domino’s pizza store in Sydney: Fast food companies are making healthy profits and boldly innovating in the unlikely market of Australia. Photograph: REUTERS/David Gray

Fast food may be falling out of favour in many countries around the world but companies are making healthy profits and boldly innovating in the unlikely market of Australia.

Contrary to stereotypes of a beach-going community of fitness fanatics, official data out this week showed 40 per cent of Australian adults are dangerously obese and have a poor diet that includes lashings of fast food.

That makes Australia a hotbed for innovation by companies including homegrown firm Domino’s Pizza Enterprises Ltd, McDonald’s Corp and Yum! Brands’s KFC and Pizza Hut as they struggle to win over health-conscious diners in other countries.

“We’ll continue to push the boundaries of digital innovation this year, creating barriers to entry for our competitors,” Domino’s chief executive Don Meij said this week after reporting a 40 per cent jump in annual profit globally.

Domino’s, which operates in six countries, is adopting ideas from the new sharing economy to grow its slice of the A$14 billion quick service restaurant trade in Australia.

In what it claims as a world-first, Domino’s in May launched a driver-tracking system inspired by Uber Technologies’ ride-sharing app that lets customers follow their pizzas’ journeys using smartphones, tablets and TV screens. It aims to use that technology to charge customers extra for guaranteed 15-minute delivery, a premium service designed to steal customers from drive-through outlets.

Domino’s plans to roll out its driver tracking service to the Netherlands by Christmas and to Japan, France and Belgium by the end of next year.

It also offers crowd-sourcing app Pizza Mogul. Launched a year ago, it allows customers to design their own pizzas, market them on social media and pocket a cut of the sales.

US giant McDonald’s now has 750 stores around Australia with touchscreen kiosks, another world first, allowing customers to customise their burger. Don’t like pickles? Leave them out. Want a different condiment? Choose from a selection. In some outlets the “create your own taste” burgers are presented on wooden boards and the fries come in a basket.

“We are going to learn a lot of how that works and when something works we can transport it from market to market at pace,” McDonald’s chief executive Steve Easterbrook told reporters in the US last month.

Australia is considered a perfect testing ground for new ideas because the country of about 23 million people has a mature fast food market, educated consumers and its isolation affords clear analysis of how well innovations are performing.

“Opportunity costs are low, global competitors don’t closely track the market, so you can camouflage what you’re doing,” said Rohan Miller, a business expert at Sydney University, who studies the fast-food market for commercial groups.

“If something is missing, you can understand why and change it before taking it to the main market.”

And there’s clearly demand for fast food. A study by the government-backed Commonwealth Scientific and Industrial Research Organisation (CSIRO) released this week shocked much of the public with a finding that on average Australians consumed three times more junk food than the recommended daily allowance.

“This type of food is no longer just an indulgence, it’s becoming mainstream and Australians are eating it each and every day.”

So far, consumers have gobbled up the new products and technology.

McDonald’s Australian business bucked the US downward trend to post 10 consecutive months of positive sales in June after rolling out its DIY burger menu service, home delivery and cafe redesigns.

The burger chain counts the “create your taste” idea as its most significant innovation since the introduction of McCafe, which was also first launched in Australia.

It also quietly opened The Corner cafe in Sydney late last year, a completely rebranded outlet with white frontage, rustic wooden seating, potted plants on the counter and fashionable South American grain quinoa on the menu. McDonald’s said it currently had no plans to take the concept overseas, but analysts are watching the experiment closely.

Sales at fried chicken restaurant KFC, meanwhile, have rebounded in Australia since 2010 after it launched mobile ordering apps and social media marketing. Australian sales for its parent YUM!, which also owns Pizza Hut and Taco Bell, have been rising about 3 per cent a year, making it Australia’s second most popular fast food chain behind McDonald’s.

KFC opened its own gourmet trial store in Sydney’s outer west in February, a concept it intends to roll out nationally if it proves successful.

Australians can expect to be subjected to even more tests as fast food companies look to diversify from their traditional offerings. The change is reflected in McDonald’s latest national advertising campaign: “How very unMcDonald’s.”