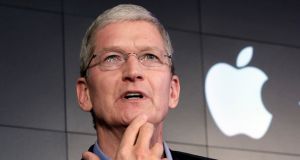 Apple chief executive Tim Cook: says the FBI, by asking Apple for help to unlock Syed Rizwan Farook’s phone, is trying to ‘build a back door to the iPhone’. Photograph: Richard Drew/AP

In one of the most famous ads of the tech world, a woman bearing a hammer runs through a totalitarian dystopia towards the looming face of Big Brother on a giant screen, brainwashing his populace. “Today, we celebrate the first glorious anniversary of the Information Purification Directives,” he bellows as the woman approaches, pursued by heavily uniformed guards.

At the very moment Big Brother vows “we shall prevail”, the woman unleashes her hammer and smashes the screen, shocking the assembled believers as the remnants of their totalitarian control system blows over their faces.

The bombastic ad, titled 1984, was the first for Apple’s Macintosh and struck a chord largely because of its heavy-handed symbolism: the woman represents the individualism of Apple, while Big Brother represents the hegemonic IBM, aka Big Blue, then at the zenith of its control over the computing industry. But the symbolism resonated for years and decades after that ad first aired during the 1984 Super Bowl, particularly for as long as Apple remained the underdog in the technology industry.

In recent years, of course, that scenario has been turned on its head, with Apple becoming the undisputed leader in the computer industry since the advent of the iPhone. Thus, it has become fashionable to point out that if that ad was to be made now, it would be Apple up on that big screen, brainwashing its true believers with its cult-like propaganda.

That assessment might need a bit of revision after the events of last week, when Apple chief executive Tim Cook threw a metaphorical hammer in the face of Big Brother by taking an emphatic stand against the FBI and the US department of justice.

The FBI has a court order demanding that Apple offer assistance in unlocking an iPhone that belonged to Syed Rizwan Farook, who with his wife, Tashfeen Malik, opened fire on his colleagues in a San Bernardino civic-services centre last December, killing 14. The couple were killed by law enforcement officers after the attack, and it is believed they were inspired by Islamic State, turning the attack from just another mass shooting into the deadliest terror attack on US soil in years.

Intricacies of the case

On the face of it, this doesn’t sound like the most egregious case of government overreach. The FBI want to ascertain the degree to which Farook and his wife were communicating with Islamic State forces elsewhere, and Farook can’t very well unlock the phone. Apple has already co-operated with the FBI on this case, handing over material stored on iCloud.

But hard cases make bad laws, after all, and this new request goes much further, as Cook explains. “The US government has asked us for something we simply do not have, and something we consider too dangerous to create. They have asked us to build a back door to the iPhone . . . In the wrong hands, this software – which does not exist today – would have the potential to unlock any iPhone in someone’s physical possession.”

The spectre of Edward Snowden hangs over the entire case: after his revelations about the extent of government surveillance, it is hard not to see this move by the FBI as part of a larger pattern of security agencies demanding a “golden key” and a “back door” to weaken encryption, all in the name of keeping us safe, while ignoring the glaring threat to civil liberties.

Many are interpreting the FBI’s move as an opportunistic use of the San Bernardino case to prise open Apple’s security features. As security analyst Rich Mogull put it in an essay: “One reason Apple is likely fighting this case so publicly is that it is a small legal step from requiring new circumvention technology to building such access into devices.

“The FBI wants the precedent far more than they need the evidence, and this particular case is incredibly high-profile and emotional.”

And that’s to say nothing of what might happen when China, say, demands similar access to a dissident’s iPhone. In the wrong hands, after all, technology can enable the worst sort of tyranny.

Let us beware the “Information Purification Directives”, in whatever shape they come.