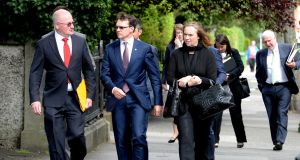 Aidan O’Brien arriving at the Labour Court on Monday for a hearing about Ballydoyle’s work practices. Photograph: Cyril Byrne

Top racehorse trainer Aidan O’Brien has told the Labour Court he would like flexibility not to have to turn down members of his staff who want to work for an hour or two on their days off.

Mr O’Brien was giving evidence in the second day of an appeal by Ballydoyle, the country’s leading racing stable, against a Workplace Relations Commission (WRC) compliance notice over the alleged excessive working hours of some staff.

Ballydoyle has contended that training racehorses is exempt from the rules governing working hours because it is classed as an agricultural enterprise.

The WRC contended when the appeal opened in July that some Ballydoyle employees had “worked for 19 hours out of 24” while others had worked for 15-17 hours a day.

Counsel for the WRC suggested on Monday, when the appeal resumed, that Ballydoyle could employ additional exercise riders and grooms to allow existing personnel to take appropriate breaks.

Mr O’Brien said the continuity of having the same exercise rider or groom working with a racehorse was vital.

He said an almost telepathic bond could develop between a rider and a horse, adding that the continuity enhanced safety and welfare for horse and rider. Mr O’Brien said making changes increased the risk of injury to both.

He said all he was seeking was in cases where an employee wanted to ride their horse for an hour or so on a Sunday or on their day off , he could say “yes, you can”, without breaking the law.

Earlier on Monday, the Labour Court heard that grooms and other staff working at Ballydoyle regularly volunteered to come to work during their rostered time off.

Robbie Manton, who is the head of yard at Ballydoyle, said most grooms arrived in work at 6.30am, although sometimes they could be be rostered to come in at 5am for feeding.

Mr Manton, who is among the staff who were the subject of compliance notices, said his typical day started at 6am. He said they all worked until close to noon, then took a break until 3pm, before returning to work until 5pm.

He indicated that grooms and exercise riders received on average 1½ days off a fortnight, but could “volunteer” to come in on rostered time off, on, for example, the morning after their horse did well in a race.

Each groom had between four and six horses under their care, he told the court. He said he, or sometimes grooms, could be contacted to deal with issues with their horses on their days off, or in evenings or overnight.

On race days at Dundalk, for example, Mr Manton said staff would start as normal in Ballydoyle at between 5am or 6.30am, and would not return to the stables until “about 12.30am” that night, where they would do another 30 minutes of work before finishing.

The horseboxes used often contained bunk beds for grooms, who could sleep in them if required when travelling.

If it was a race in England, the horses would fly from Shannon the evening before after a normal day’s work, accompanied by the grooms. They would then return and finish work at about 10.30pm the following evening, which Noel Travers, counsel for the WRC, described as “working for two days flat”.

Mr Travers asked whether, at the end of a race trip such as a 1am finish after Dundalk, these staff would then normally come in at the usual 6.30am start for the next day’s work. Mr Manton agreed that this often happened.

“We choose to have that connection with the horses, to give them that level of care,” he said. “It’s probably our own fault. If that horse won, they wouldn’t want anyone else touching their horse. That’s generally what happens.”

The court also heard from Clem Murphy, who is bloodstock consultant at Coolmore’s breeding operation. Ballydoyle is effectively the racing arm of Coolmore, although they are separate legal entities.

On the issue of grooms working from early morning until after midnight on race days, he said the grooms would not be “physically working” for a lot of that period.

“They can have a rest, read a book, or lie down [in the bunks within the horseboxes],” Mr Murphy said. “I’m saying there is plenty of downtime. It’s not all work.”

Mr Murphy said the work of Ballydoyle was essential to the Coolmore operation, and that training winners boosted the value of those horses to Coolmore.