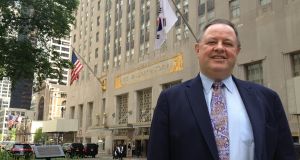 Mr Keane is set to step down on Thursday, but will remain on the board until his retirement at the 2021 annual general meeting. He will also step down as chairman of the board of the Glanbia Co-operative Society, and a successor will be appointed on October 8th.

Mr Gaynor was appointed director of Glanbia in March 2013, and has served as chairman of the remuneration committee. During his time with Glanbia, he has also been a member of both the audit committee and nomination and governance committee, as well as board director with responsibility for workforce engagement.

He will serve as chairman of Glanbia’s board until the 2022 agm, at which time he will have served on the board for nine years.

“It is a privilege to be appointed chairman of Glanbia,” he said. “I look forward to working with the Glanbia team and my board colleagues on the successful delivery of strategy and value creation for our stakeholders. On behalf of the board, I want to thank Martin for his stewardship of the group, in particular for his leadership through the current Covid-19 pandemic.”

He is also a fellow of Chartered Accountants Ireland and the American Institute of Certified Public Accountants, and has held senior executive leadership roles with the Seagram Spirits & Wine Group in New York.

“Since joining the board, Donard has brought experience and energy to Glanbia and in his role as remuneration committee chair, he has led prior engagements with our shareholders,” Mr Keane said.

“I know he will use those qualities and his experience to make an excellent chairman. I would like to wish Donard well as he takes up his new role.”

1 How to gift your child a house deposit . . . tax free
2 BOI customers to be charged twice with bank fees on New Year’s Eve
3 Irish designer of Oxford vaccine: ‘I’ve never worked so hard in my life’
4 Son putting elderly dad under pressure to sign over land
5 We continue to ignore massive pensions elephant in the room
6 Workers have little idea of the cost of retirement income
7 Digital bank N26 targets one million customers in the Republic
8 O’Flynn and BlackRock to double money with €100m sale of former HP campus
9 CRH predicts €800m charge this year related to Covid and Brexit
10 Elon Musk unseats Bill Gates as world’s second-richest person
Real news has value SUBSCRIBE