Bespoken Spirits says its technology ‘instils the barrel into the spirit’ 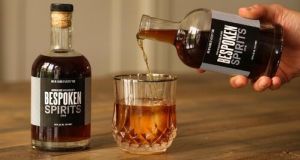 Bespoken has achieved some early success in blind-tasting competitions.

A Silicon Valley-based start-up is taking on the $500 billion (€425 billion) global spirits industry with proprietary technology it claims can reproduce the taste of a barrel-aged whisky, rum or brandy in three to five days.

Bespoken Spirits, founded by materials scientist Martin Janousek and entrepreneur Stu Aaron, has won awards in blind tastings with drinks made by exposing alcohol to “micro staves” of different woods under pressure, in what they likened to a “Nespresso machine on an industrial scale”.

Its public launch on Wednesday comes as spirits prove resilient in the pandemic, partly because of a trend for home cocktail making that helped compensate for the impact of bar closures on distillers such as Diageo and Pernod Ricard.

Mr Aaron said: “Rather than putting a spirit into a barrel and passively waiting for nature to take its course over decades, our technology instils the barrel into the spirit, delivering a premium-quality tailored spirit in days rather than decades.”

The process uses a fraction of the wood and energy of barrel ageing, Bespoken said, while avoiding the disappearance of the so-called “angel’s share” of spirit that evaporates during maturation.

Bespoken’s launch met with a frosty response from the Scotch Whisky Association, which said many markets required maturation in casks for a spirit to be sold as “whisky”, including the UK and EU, where it must be aged for three years.

“Those quality definitions of whisky protect the reputation of whisky as a traditionally aged product, and other spirits produced with other techniques should be labelled in a way which doesn’t take unfair advantage of that reputation,” it said.

“The SWA will take action all over the world to stop the sale of products which seek to compete with Scotch Whisky as ‘whisky’ but fail to meet the legal requirements of the country of sale.”

The US does not specify an ageing process for whisky, however, and other US-based distilleries are also working on accelerated ageing technology, often alongside an element of traditional ageing.

California-based Lost Spirits uses a chemical reactor, while Ohio-based Cleveland Whiskey places its spirits in tanks together with barrel wood, then agitates the mixture and applies pressure.

Bespoken’s drinks are made from a base alcohol or by modifying existing aged spirits, including some that would meet EU “whisky” requirements.

If rapid “ageing” proves popular with consumers, it could challenge the centuries-old process of barrel ageing in oak casks.

Bespoken has achieved some early success in blind-tasting competitions, winning two gold medals in the San Francisco World Spirits Competition this year and a “best of category” award for craft blended whisky at the American Distilling Institute’s Judging of Craft Spirits.

Mr Aaron said the company had deals to make spirits for a US grocery chain and custom drinks for bars and restaurants. It can identify and reproduce the “chemical fingerprints” of aged liquors, he said, or tailor tastes, colours and aromas to specific requirements.

Bespoken, backed by investors including the Cypress Semiconductor founder TJ Rodgers, is talking to breweries about using expired beer that went unused during lockdowns as a base for its products.

Some analysts have argued, however, that accelerated ageing may struggle to replicate processes such as oxidation and esterification, which produce fruity aromas.

Not all drinkers are convinced. A reviewer at Portland-based publication Whiskey Wash labelled Bespoken’s bourbon “not bad” but said “there was very little that was exciting about this drink either”. – Copyright The Financial Times Limited 2020