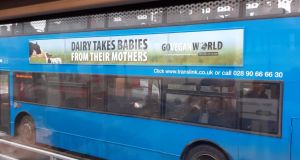 The UFU president Ivor Ferguson said union members, many of whom rely on Translink for transport, were “outraged” by the advertisements.

The Ulster Farmers’ Union (UFU) has called on Translink in Northern Ireland to remove vegan advertisements on their buses, claiming that they “demonise” the livestock industry.

The advertisements on a number of Ulster buses and also on some school buses feature the statements, “It’s not a ‘personal choice’ when someone is killed - use plants, not animals” and “Dairy takes babies from their mothers”.

The adverts were placed by Go Vegan World.

The UFU president Ivor Ferguson said union members, many of whom rely on Translink for transport, were “outraged” by the advertisements.

“A public service should be impartial on all matters but the vegan adverts on the Translink buses uses emotive language that singles out our local farmers and has the potential to do serious damage to our agriculture industry and the livelihood of our farming families,” he said.

Mr Ferguson added that while Northern Ireland farm produce meets “the highest environmental and animal welfare standards in the world” the ads helped to “perpetuate a negative narrative about eating meat and consuming dairy products”.

Calling for the removal of the ads Mr Ferguson said UFU complained directly to Translink but it “reflected an inability to remove them”.

“We respect all personal decisions when it comes to diets but to demonise the livestock industry to promote another industry is wrong,” he said.

Sandra Higgins, director of Go vegan World, said the organisation has a legal right to freedom of expression. “Our ads merely quote facts about animal use. We see this discomfort about our ads as an indication that, at a deeper level, people are uncomfortable about earning a living from exploiting defenceless animals and uncomfortable about creating a demand for the violence of animal agriculture or any other form of animal exploitation,” she said.

“We are not opposed to farmers: we are opposed to their use of other animals as commodities for profit,” added Ms Higgins.

“We are very sympathetic to the pressures facing our local farming community and recognise the important role they have in our economy and rural communities. By carrying this advert we are not taking a stance on the issue,” she said.

“We understand the campaign also ran on public transport in London,” added the spokeswoman.

1 Irish companies restrict travel over coronavirus fears
2 Suspicions rife as key Brexit trade talks begin in Brussels
3 Life as a Facebook moderator: ‘People are awful. This is what my job has taught me’
4 Bogus notion that supply will cure our housing woes
5 Coronavirus rocks financial world as hopes for containment fade
6 ‘The only time apartments were viable was in . . . Ballsbridge, Killiney and Dalkey’
7 How well paid do you think you are? Here’s how to work it out
8 Coronavirus: Iseq down 11% in five days as global sell-off is worst week since 2008 crisis
9 Bank leaked my loan request to family who tried to rip me off
10 The Cork butcher’s daughter directing A-list celebrities in Miami
Real news has value SUBSCRIBE