Self-made restaurateur driven by a need to prove his mettle 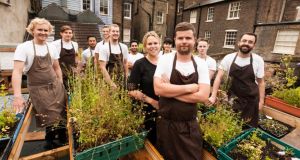 Robin Gill with wife Sarah and the team of The Dairy, Clapham, London

Chef Robin Gill from the Sandycove/ Glasthule area of Dublin is head chef and director of The Dairy restaurant in Clapham, London, which has been cited as a “star turn” by the Guardian and “the cream of the crop” by the London Metro. The restaurant was recently voted 24th in the top 100 restaurants in UK and ranked 7th most sustainable restaurant in the UK.

As a teenager, Gill says, he didn’t pay too much attention at school. He repeated his Leaving Cert to get into UCD but realised he was wasting his own time and his parents’ money.

“I began to feel guilty because it was the first time my parents had paid for me to go to school. I felt that I should do something hands-on, so I organised an apprenticeship as an electrician,” – much to his parents’ amusement. They suggested he become a chef as he was creative and keen on cooking.

He began his career working in Dublin restaurants and brasseries. After a year, he followed some chef friends to London. He knew by then that he wanted only the best.

“I travelled around London with the Michelin Guide knocking on the doors of any restaurants with one or two stars with my resume and a cover letter,” says Gill of the early days.

“I got two offers – one from Conrad Gallagher at Lindsay House and the other at Marco Pierre White’s The Oak Room.”

His induction into fine dining proved a shock: “After about three months, I came up with a few good projects and became part of the team but it was a shock to the system. I hadn’t worked six days a week and such crazy hours in Dublin. After a year and a half of it, I vowed I wouldn’t do it again – I went travelling in Asia and had no aspirations to get back into the rat race.”

Meeting up with a friend in Italy, Gill sought to work in family-run restaurants but dreams of learning pasta-making at a mamma’s apron were not to be as the chef found himself back in fine dining, this time at Ristorante Don Alfonso – a restaurant on the Amalfi Coast that boasts two Michelin stars.

“Once you are working at that level, you then only look at places that are one or two Michelin stars,” says the 34-year-old chef.

Returning to the UK, Gill worked with renowned chef Raymond Blanc at Belmond Le Manoir aux Quat’Saisons for several years before joining the D&D group in 2008, running restaurant Sauterelle at the Royal Exchange in London’s Bank.

In 2012, he spent some time staging (a period of time during which a chef works bro bono to gain greater knowledge or experience) in famous restaurants such as Noma in Copenhagen and Restaurant Franztén/Lindeberg in Stockholm.

Having travelled around Europe and the UK his savings were running low, so Gill negotiated a deal on a dilapidated building in Clapham Old Town in November 2012 near where he lives in Brixton, much to the horror of Irish wife Sarah.

Five months on, the couple, their business partner, and the rest of their team opened The Dairy on St Patrick’s Day last year.

Gill says he has become more relaxed since opening his own restaurant.

“I was almost tighter on budgets and cost control when I was running a business for another company. Now if I want to put on a beautiful piece of meat or fish, I think that is a bigger selling point. I would rather have a busier restaurant making a smaller profit margin than a restaurant that is not as busy with a higher profit margin,” he says.

Remarkably, he describes himself as a nervous person. He says this lack of self belief has made him a harder worker because he has always felt he has, perhaps, something to prove.

“I was in the business almost 10 years before I took a head chef role and started earning any money, so I have worked hard to get here. I’ve been very lucky as well though.”

Part of that luck may be self-made.

He says he is a people-person and has surrounded himself with colleagues he can trust. “Without them, I wouldn’t have The Dairy.”

His nerves have not dented his ambition however and, despite the fact that his wife Sarah is due to give birth this month, Gill has plans to open another restaurant in the coming months.

With a book on the restaurant and urban beekeeping – The Dairy has a roof top garden and beehives – due for publication next year, plans for a craft-beer brewery in the offing and a steak-and-ale house planned for next year, he’s going to be a busy man.

“I’m hoping that, as the business grows, I will take on more people, help them grow and that they will in turn help the business to grow,” says Gill.

“We’ll open up more places – up to a maximum of five . . . then hopefully I’ll spend a little bit more time with the family. That’s the plan anyway.” the-dairy.co.uk

1 ‘The recovery needs to be a full-scale economic renewal’
2 Michael Smurfit: ‘I asked Trump to invite me to the White House for my 80th birthday’
3 Small businesses are cannon fodder in zealous anti-virus experiment
4 Minister calls on EU to act against tobacco firms ‘undermining’ menthol ban in Ireland
5 Irish business of Carluccio’s restaurants to be wound up
6 Tax and the Pandemic Unemployment Payment: Your questions answered
7 Ryanair expects air fares to fall when flights take off again
8 ‘I’m so lucky to be in the Caribbean – a million miles from Derry Girls’
9 Joint accounts: if one of us dies, can the other access the money?
10 Tobacco makers still trying to make a mint from Irish menthol market
Real news has value SUBSCRIBE