Sales of Jameson up 11 per cent, as Pernod profit rises 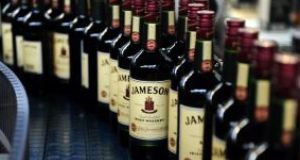 Jameson, which is the best-selling Irish Whiskey globally, is experiencing double- to triple-digit growth

Sales of Jameson Whiskey rose 11 per cent in the six months to the end of December with volumes up 8 per cent.

Jameson, which is the best-selling Irish Whiskey globally, is experiencing double- to triple-digit growth, with the top performing markets being USA, South Africa and Russia.

The brand was one of Pernod Ricard’s best performing spirits, according to its latest results. Irish Distillers, which employs over 600 people in Ireland, is part of Pernod, which on Thursday posted a 3 per cent rise in first-half profit from recurring operations.

The group described the domestic market as sluggish with volumes up just 1.1 per cent. Spirit sales in the on-trade were up 2.7 per cent in value terms with Jameson leading that growth with an 8 per cent rise in value.

Pernod said Irish Distillers chief executive and chairperson Anna Malmhake has been appointed as head of the Absolut company. She will be replaced by Jean-Christophe Coutures, currently chairman and chief executive of Pernod Ricard Winemakers

Irish Distillers said visits to the Old Jameson Distillery rose 3 per cent to 164,000 in the six months to the end of December while the Jameson Experience Midleton saw a 4.2 per cent increase in visitor numbers to 71,000, the company said.

Reporting its latest figures, Pernod the world’s second-biggest spirits group behind Diageo said it still faced a tough environment in China and difficulties in South Korea in the first half, and it kept its annual profit growth outlook unchanged.

In China, where economic growth is slowing and a government clampdown on extravagant spending has hurt demand for premium spirits, sales fell 2 per cent.

The owner of Absolut vodka and Martell cognac said it still eyed an organic rise of between 1 per cent and 3 per cent in profit from recurring operations for the year ending June 30th, 2016.