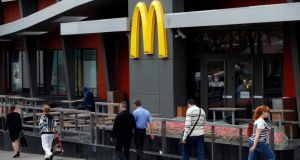 People walk past a closed McDonald’s restaurant, one of four temporarily closed by the state food safety watchdog, in Moscow. Photograph: Maxim Zmeyev/Reuters

Russia’s food safety agency will conduct checks on McDonald’s restaurants in the Urals following food safety complaints, a day after four branches of the chain were closed down in Moscow.

Unplanned checks were being carried out in a number of restaurants after residents voiced safety concerns, an agency spokeswoman said.

One of those restaurants, on Moscow’s central Pushkin Square, was the first to open in the Soviet Union in 1990, drawing crowds of thousands that circled around the block. The restaurant became a symbol of domestic reform and openness with the West, and today it is one of the company’s most visited venues in Russia.

The shutdown comes in the wake of rising tensions between Russia and the West. After the US and the European Union slapped sanctions on a range of Russian banks and crucial industries last month, Russia responded with a wide-ranging ban on food products imported from those regions.

McDonalds could not be immediately reached for comment about the checks in the Urals city of Sverdlovsk, but a statement posted on the Russian version of its website said the company was doing “all it can for a speedy opening” of the four Moscow restaurants.

Asked if the decision was a retaliation for the United States and other countries imposing economic sanctions on Moscow over the crisis in Ukraine, the source declined to comment and referred to the statement about sanitary violations.

McDonald’s head office in Illinois said in a statement: “We are closely studying the subject of the documents to define what should be done to re-open the restaurants as soon as possible.”

Russia’s first McDonald’s opened on Moscow’s Pushkin Square in 1990, when it was viewed as a sign that, under reformist Soviet leader Mikhail Gorbachev, Cold War tensions with the United States were starting to thaw. It was hugely popular with Russians; long queues formed outside and some people even had their wedding receptions there.

“We have many happy memories of this place,” said a man who gave his name as Vadim. He had come with his wife Natalya to celebrate his 77th birthday at McDonald’s, but was forced instead to buy a coffee elsewhere and drink it seated at a coffee table outside the shuttered restaurant. Asked about the allegations of sanitary violations, he said: “It’s a lie. We’ve been here since it first opened and never got ill once.”

Another of the restaurants closed on the orders of the food safety watchdog is on Moscow’s Manezh Square, under the walls of the Kremlin where President Vladimir Putin has his offices.