Organic produce holding its own as recession takes root 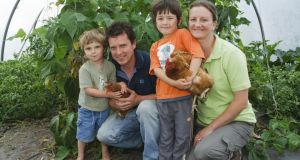 Sales of organic foods have been hit by the recession but not as badly as might have been expected. There is one main reason for this. The biggest buyers of organic produce are those with more disposable income to spend on food – empty nesters and younger people without children.

According to new research conducted by Bord Bia and seen by The Irish Times , sales to this group accounted for 35.4 per cent of the total spend on organic food last year. This compares with just 5.4 per cent for those with young families.

The typical spend on organic food items over the year was €66.50, €3.20 less than the previous year. Shoppers buy organic food an average of 21 times a year.


Drop in sales
Organic vegetables are the largest single market worth almost €25 million. However, this segment is in decline. Sales dropped 9.4 per cent to €24.9 million in the last year. Organic fruit and egg sales are also down while sales of organic milk fell by 28.5 per cent.

The biggest gain was made by organic yogurt. Sales are up by 6.6 per cent to €23.5 million and organic products now account for about 25 per cent of total yogurt sales in value terms. Also bucking the decline are organic breakfast cereals where sales are up 4.7 per cent. Most of the organic food produced here is for domestic consumption. Beef and salmon are Ireland’s two main organic exports.

Becoming a certified organic food producer is a significant commitment. The sector has high standards and producers must keep detailed records and adhere to the regulations and protocols that underpin their certification.

Margins on organic food vary, but a rule of thumb is a 10-15 per cent premium. For many producers, however, being organic is about more than money. It is also a philosophical and lifestyle choice.

“We wanted to farm into the future in a way that was sustainable and less dependent on supports,” says Seán Clancy of Clanwood Farm, Cloghan, Co. Offaly.

“We sell our meat directly to specialist shops and are in control of our pricing rather than being dependent on factory prices. A premium of 10 per cent is about average. It costs less to farm organically as you have fewer inputs but it is more labour intensive until you develop a system.”


Horsemeat scandal
Seán and Orla Clancy having been running their 220-acre farm organically since 2007. Since the horsemeat scandal hit the headlines earlier this year they have experienced a 15 per cent increase in sales.

Last year “was definitely the hardest year ever but we managed to grow by around 10 per cent by getting the pricing right, having the quality spot on and being ready to make the most of any opportunity”, says vegetable grower Pádraig Fahy of Beechlawn Organic Farm in Ballinasloe, Co Galway.

“We also increased production, expanded our spread of outlets and tried to hold costs steady.”

“I have no regrets about being in organics. I like the mix of jobs and the diversity of life in the soil. But I know of people who left organics because it was so hard last year. I don’t find the paperwork that bad.

“ Yes, you have to keep track of everything but it forces you to be very aware of what’s working and not working in your business. It’s a good tool that drives you to do better.”

“The recession has made money scarcer and we’re seeing an increase in volumes but a decrease in value. People are spending on staples, not the luxury end,” says Grace Maher, development officer with the Irish Organic Farmers and Growers Association, one of the bodies certifying organic producers in Ireland.

The term “organic” is legally binding when applied to food and Maher says those using the designation must be accredited.

“The regulations cover a wide area from animal welfare to traceability and producers are open to spot checks and an annual inspection,” he says.

“The standards are high, but not unmanageable, and in the main organic farms are more profitable and less vulnerable.

“Many organic producers also like the freedom of selling directly but those who engage with the big retailers can do okay if they grow and sell in season at competitive prices.”


Critical mass
Lorcan Burke, analyst with Bord Bia, believes organics have reached a certain critical mass in Ireland and are here to stay, as there will always be consumers who require extra assurance about the provenance of their food.

“What’s hit the sector recently is cost in a recessionary environment not a drop in support for the concept,” he says.

“The UK and Ireland are feeling the pinch but France, Germany and Italy are all still growing well.

“If companies can scale up to export there is a bright future, not necessarily just with branded products but as raw material suppliers into big growth areas such as organic baby food manufacturing.”

1 Nine more suing INM and Leslie Buckley over alleged data hacking
2 Columbia Sportswear defies gloom with first Irish standalone shop
3 Restaurants file court actions against insurers over lockdown losses
4 ‘The rental situation stops me moving back home’
5 VAT cuts are for businesses – consumers will still pay the same
6 High Court appoints interim examiner to Compu b parent company
7 How much do Irish people earn? And what will Covid-19 do to our wages?
8 Second Covid-19 outbreak and no-deal Brexit an appalling vista
9 Could your old car be giving away all your secrets to its new owner?
10 Why are markets booming when a crash is on the way?
Real news has value SUBSCRIBE