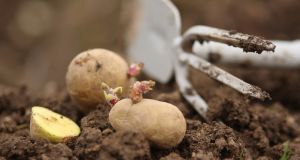 Revenue at Donegal Investment Group rose by 4.6 per cent to 46.1 million in the six months to February 28th, driven primarily by the company’s speciality dairy business.

Donegal Investment, formerly known as Donegal Creameries, said there were also improved margins for its seed potatoes business, with strong pricing making up for the impact of adverse weather conditions on the availability of seed.

Operating profit at the company rose 600,000 to 3.9 million for the six month period, while pretax profit was 4 million, up 700,000 compared to the same period a year earlier.

Revenue in its produce division rose by 2.8 per cent to 19.2 million, with profit almost 20 per cent higher at 2.7 million. Its food and agri-business section, which includes its dairy and animal feeds businesses, saw revenue from operations rise by 5.9 per cent to 26.8 million, but profit fell 200,000 to 1.2 million. Animal feeds business Smyths performed “satisfactorily”, the company said.

Adjusted earnings per share rose to 79.1 cent, a rise of 50.4 cent following the return of 51 million in capital to 19,000 shareholders last year. That left the company with net cash of 2.8 million at the end of February.

The company said its speciality dairy business had continued to deliver “good volume growth with listings being achieved for new products with a number of key customers in the UK”.

Last year’s summer drought adversely impacted seed potato crops across Europe, the company said. This led to reduced availability of seed “with the lack of market supply driving a significant increase” in prices.

Donegal generates the majority of its sales in the first half of its financial year, in large part because of the seasonal nature of its increasingly important seed potato business.

The company said it would continue its ongoing strategic review of operations,

“The board is optimistic that all businesses will remain on plan for the remainder of the year and the board will continue to progress its non-core asset disposal programme during the second half of the year, particularly in respect of its remaining property assets,” the company said in a statement.