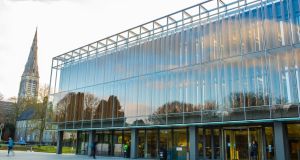 The library at Maynooth University

Outsourcing group Mount Charles has picked up an estimated €10 million contract to provide food and drink services to Maynooth University.

The deal will add to the Belfast-based company’s significant client portfolio in the Republic, which includes RTÉ, the Abbey Theatre, the Customs House, the Public Appointments Service, Ordnance Survey Ireland, the National Aquatic Centre and Griffith College Dublin.

The Griffith College deal is worth €9 million to Mount Charles, and industry sources speculated that the slightly larger Maynooth deal would be worth about €10 million over the four-year term.

Under the agreement Mount Charles will run all the Maynooth University food service operations on campus, including restaurants and cafes. It will cater to the 14,000 students, staff and visitors on site. The main student restaurant, Phoenix, has been rebranded as Urban Square Food Co and Urban Square Coffee Co.

“Ensuring we have the very best catering service and value-for-money, quality food offer, is essential for the health and wellbeing of the university and its community,” said Michael Rafter, director of campus and commercial services at Maynooth.

Mount Charles has also launched another brand – Pop – on campus, which offers sweet items, in addition to its own Mexican street food brand, Coco Diablo. It has also refreshed a Starbucks cafe already on site.

“We are looking forward to working alongside Maynooth University and delivering on our ambitious plan to completely transform the campus restaurants and cafes and offer something really unique to students, staff and visitors,” said Mount Charles Ireland commercial director Terry Woods.

Mount Charles was founded in 1988 and now employs more than 2,500 staff across outsourced activities such as food, cleaning and security. The company also supplies staff for events and works with Ulster Rugby and Down Royal Racecourse. Among its 150 catering contracts is one at Belfast International Airport, while it services more than 600 sites in its cleaning arm.

In the latest year for which accounts are available, Mount Charles boosted its turnover from £33.9 million (€40.9 million) to £40 million. Its profit before tax in the year to September 27th, meanwhile, rose almost threefold to £1.5 million.