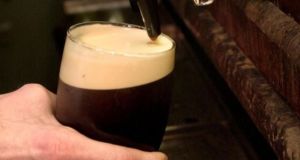 Adjusted earnings fell nearly 13 per cent to 69.9 pence per share, but beat the 67.8 pence analysts had expected

Diageo on Thursday reported a surprise rise in underlying net sales growth for the first half of its year, as strong demand at retail stores in the United States made up for weak business at bars and restaurants in Europe.

The United States accounts for nearly 45 per cent of group profits and has been a bright spot for the world’s largest spirits maker during the pandemic, with 80 per cent of its sales coming from retail stores. In the other markets, bars and restaurants make up most of the sales.

“North America growth was driven by resilient consumer demand...and the replenishment of stock levels by distributors and retailers,” Diageo said.

It reported a 1 per cent rise in organic net sales growth for the six months to December 30th, compared with a drop of 4.6 per cent that analysts had expected, according to company supplied estimates.

Adjusted earnings fell nearly 13 per cent to 69.9 pence per share, but beat the 67.8 pence analysts had expected, hurt by higher operating costs and a stronger pound.

The Johnnie Walker whisky and Tanqueray gin maker stayed away from issuing any specific annual sales outlook, but said it expected organic operating profit growth in the second half to be ahead of organic net sales growth in all regions, except in North America.

“We expect ongoing volatility and disruption in the second half of the year, particularly in the on-trade channel, which will make performance more challenging,” Diageo chief executive officer Ivan Menezes said in a statement.

The company also raised its interim dividend by 2 per cent to 27.96 pence per share.