Bread alert: why Brexit and a bad harvest will force up the price of sliced pan 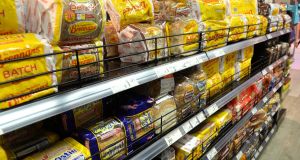 The price of sliced pan, Ireland’s most popular bread, could be going up. Photograph: Dara Mac Dónaill / The Irish Times

Irish bakeries are warning that an increase in the price of sliced pans is “inevitable” as a result of Brexit. Why is this?

It is (mostly) about flour – the right type of flour. The State is not self-sufficient in flour, with Food Drink Ireland (FDI) estimating that as much as 80 per cent of the flour used in bakeries here is imported.

A great deal of this comes from British millers, which at first glance might not seem like a problem – the UK and the EU struck a trade and cooperation agreement (TCA) that averted tariffs on imports and exports from one to the other. The issue is when the materials that form part of the export are actually of “third country origin”. Then, tariffs can kick in.

“Under the rules of origin in the TCA, there is a requirement that the wheat used should be of UK or EU origin, with a maximum tolerance of 15 per cent for grain from other countries such as Canada or the US,” says FDI director Paul Kelly.

If the wheat used to make flour is more than 15 per cent of third country origin, a full tariff of €172 per tonne becomes payable – a 50 per cent increase in the product cost.

Irish bakeries did some “prudent stockpiling” of flour before Christmas, helping to keep consumer prices flat in the first part of January. But an increase is inevitable “fairly imminently”, according to the Irish Bakery Association (IBA).

“Bakeries won’t be able to afford to absorb the rising price of flour and other ingredients for much longer,” says IBA secretary Gerald Cunningham.

How much will prices go up?

The IBA, which represents mostly craft bakers, says prices could soon be 10-15 per cent higher, while FDI suggests 9 per cent, which is based on earlier projections from the Economic and Social Research Institute (ESRI) on the impact of the flour tariff alone.

Current prices for a sliced pan (800g) range from as low as 60 cent at some discount supermarkets to €2.25 for fancier varieties. But for a standard white sliced pan, for example, an increase of about 15 cent could be on its way – unless retailers decide not to pass on the higher prices for competition reasons.

Can’t Irish bakeries simply change the type of flour they use to avoid tariffs?

Not without changing the end product that Irish consumers know and love – the product specifications for sliced pan usually demand a higher percentage of US and Canadian wheat than allowed for under the 15 per cent tolerance rule. The third-country wheat in the flour imported from Britain is “rarely” below this level, says FDI.

While French and Polish wheat is often part of the mix, the substitution options from within the EU are limited, says the IBA. This is because the flours produced on the continent are “best suited to their own style of baguettes and bagels and less so to our sliced pan and traditional Irish breads”.

It is harder wheat with higher protein levels that yields the stronger flour needed to produce that fluffy sliced pan texture perfect for sandwiches and toast. “The Canadian wheat is the gold,” says Cunningham.

The good news is this means the price pressures on other types of bread aren’t as acute. But sliced pan is still the most popular type of bread in Ireland, accounting for the majority of sales.

Is Brexit the only factor behind this increase in consumer prices?

Alas, no. Global wheat prices have been climbing for other reasons too. Most recently, this is because Russia, the world’s biggest wheat exporter, is trying to take the heat out of its own food inflation by introducing quotas and duties on shipments. Its measures, combined with supply squeezes elsewhere and swelling Chinese demand, have sent wheat prices surging.

Flour prices have also risen because the UK wheat harvest in 2020 was the worst in 40 years. Heavy rain in autumn 2019 meant many farmers could not plant as much wheat as they usually would, nor did the waterlogged soil help the wheat thrive. A hot, dry spring then made it hard for the crop to absorb nutrients from the soil.

Meanwhile, the Irish baking industry is also seeing price hikes on the cost of other imported sliced pan ingredients – yeast, sugar and vegetable oil – as a result of global supply-and-demand issues.

Because the Republic imports all its sugar (since 2006) and yeast (since 2009) and produces very little vegetable oil for bakery use, a rise in shipping costs thanks to Brexit and the Covid-19 crisis has also proven unhelpful.

Can the Government do anything to ease import strains for Irish bakeries?

After the closure of several industrial mills – including the Odlums mills in Cork (2009) and Alexandra Road near Dublin Port (2012) – flour imports have increased in recent years. Odlums’ last mill is in Portarlington, Co Laois, while the other two remaining big mills in Ireland are in Belfast.

In Wexford, brothers Andrew and Ray Kavanagh have plans to construct a flour mill in Enniscorthy – some projects like this could, in theory, be supported by Government Brexit grants. But however it pans out, the Republic will continue to be reliant on imported flour.

FDI, which is part of business group Ibec, has urged the Government to push for a derogation for the Irish bakery sector from the TCA’s rules of origin. This, says Kelly, would resolve Brexit-created marketplace distortions in which bakeries based in Britain, Northern Ireland and the EU can use the same specification flour as bakeries in the Republic, yet not face the same tariffs.

The current situation gives a “significant competitive advantage” to finished products produced elsewhere, which includes some supermarkets’ own-brand bread as well as brands produced in the North. This will be a problem “uniquely faced” by bakeries in the Republic, says Kelly, until a “tariff-free solution” is found.