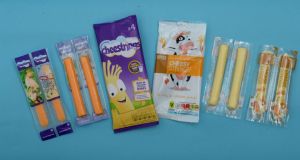 A company in the Kerry Group has sued Dunnes Stores over allegedly infringing its trademark by launching its own brand of peelable cheese under the name “Cheesy Strings”.

Zenbury International, the primary intellectual rights holding company within the Kerry Group, manufactures the cheese snack Cheestrings. Zenbury claims Dunnes has infringed its registered trademark by launching, without Zenbury’s consent, the peelable cheese product under the name Cheesy Strings. Mr Justice Brian McGovern has agreed to fast-track the case in the Commercial Court.

In its proceedings, Zenbury seeks various orders including prohibiting Dunnes from offering, stocking or marketing any dairy or cheese product bearing the name Cheesy Strings.

Paul Gallagher SC, for Zenbury, said Cheestrings had been a most successful and distinctive brand since the late 1990s and enjoyed substantial sales. The product is manufactured by Henry Denny and Sons, part of the Kerry Group since 2001, and is sold in Ireland, Britain and continental Europe, Mr Gallagher said.

The proceedings arose after Dunnes recently put on sale a peelable cheese product which he contended was very similar in appearance to Cheestrings. Dunnes’ actions were likely to cause confusion between the products, he said.

It was also feared, he added, that an impression would be created that Cheesy Strings, which Zenbury claims is exclusively made for Dunnes, was a product sold by the Kerry Group. Zenbury claims the Dunnes product is inferior to its Cheestrings product.

Dunnes was asked last month to desist from using the mark Cheesy Strings and to destroy all products and their packing but there was no response , Mr Gallagher said. Dunnes escalated matters by offering a buy one, get one free promotion in respect of Cheesy Strings.

Zenbury intended to seek an injunction restraining Dunnes from selling Cheesy Strings pending the outcome of the full hearing, he added.

Michael Howard SC, for Dunnes, said he was neither objecting nor consenting to the case being admitted to the Commercial Court list but needed time to respond to the claims before the application for an injunction was heard.

Mr Justice McGovern adjourned the case to later this month.