Irish Distillers in talks to sell Paddy whiskey to Sazerac 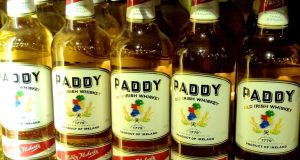 More than 200,000 9-litre cases of Paddy are sold in 28 countries worldwide annually

Irish Distillers has said it is in talks to sell the popular whiskey brand Paddy, in a move that would see it still being produced at the Midleton Distillery in Cork.

The group said it had entered into exclusive negotiations with the New Orleans-based company Sazerac over the sale of what is the fourth largest Irish whiskey brand in the world.

Irish Distillers’s owner Pernod said it was not in a position to disclose the deal value.

“Pernod Ricard is currently undertaking negotiations with Sazerac. At this point, the focus is on ironing out operational aspects of the deal and preparing for a smooth transition,” a spokesman for the company said.

The company said if the transaction is completed there would be no impact on employers at Irish Distillers with staff continuing to remain on their current terms and conditions.

It said the proposed divestment was “in line with the Pernod Ricard strategy to simplify its portfolio for growth and could facilitate, among other things, targeted investment in other key Irish Distillers’ whiskey brands including Jameson and Powers to support continued growth.”

More than 200,000 9-litre cases of Paddy are sold in 28 countries worldwide annually.

“At the heart of everything that Irish Distillers does is a desire to see Irish whiskey grow. This deal with Sazerac, if completed, would allow Irish whiskey’s reputation and footprint to grow further internationally. The proposed deal would ensure that Paddy would continue to be produced with the same love and care by our team in Midleton, Cork,” said outgoing Irish Distillers chief executive and chairwoman Anna Malmhake.

Subject to pending negotiations, Irish Distillers and Sazerac expect to sign and complete the transaction in the coming weeks.

“In the global market, Irish whiskey experienced the fastest volume growth in the last five years, outpacing all other spirits categories. Consumers worldwide are seeing it as an alternative to other whiskies. If this deal goes through, we are confident that we will be able to take Paddy to the next level, building on its strong history and roots,” said Mark Brown, president and chief executive of Sazerac.