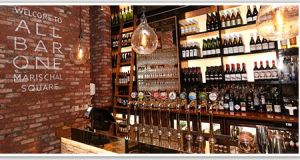 An All Bar One pub in the UK, part of the Irish-backed Mitchells & Butlers group

Irish-backed UK pub giant Mitchells & Butlers said on Tuesday that it has secured significant temporary relief from its banks to get through its closure during the coronavirus lockdown.

The Birmingham-based company, in which Irish horse-racing magnates JP McManus and John Magnier hold a combined 23.5 per cent stake, said that its banks have granted it a waiver until May 15t, of a debt service covenant test.

Failure of such a test would result in a technical debt default. Discussions are ongoing with its lenders.

The owner of 1,748 pubs, bars and restaurants under a number of brand names, including All Bar One, O’Neill’s and Ember Inns, has put 99 per cent of its workforce on leave as its outlets have been closed for more than three weeks.

“It is helpful to hear that the group has re-negotiated a short-term waiver pending further discussions, and that costs have been brought under control quickly,” said Paul Ruddy, an analyst with Goodbody Stockbrokers.

“Management notes that its cash resources will fund it well into the second half of the year. Although today’s update does not include a waiver for the year-end covenant test, we highlight that the group had £4 billion (€4.6bn) of land and buildings, with £1.7 billion of total debt at [its] last year-end, which should put the group in a good negotiating position.”

Last month Mitchells & Butlers warned that it “could suffer a significant loss” in the four weeks before it is due to have its covenants tested as the spread of Covid-19 is set to lead to a slump in sales.

That warning predated a general UK lockdown, and came at a time when Boris Johnson’s government was merely recommending that people avoid pubs and restaurants. It remains uncertain when restrictions will be eased.

The FTSE-250 listed company said on Tuesday that it was in “close contact” with other stakeholders, who are supportive of the business.

“The group has material cash resources which we believe should be sufficient to fund obligations well into the second half of the year,” it said.

1 ‘It’s been quite easy’: Insights from the heart of the remote working revolution
2 Aviva Irish general insurance chief executive sues employer
3 Aviva Ireland CEO sues own firm, data protection and tasty innovation
4 Transatlantic data transfers once again in the dock
5 Osmo is a home-school hero – an app that educates and distracts
6 Denmark’s answer to Ikea signs deal for first Dublin outlet
7 EU court to rule on the Apple state aid case
8 Gilead to add 140 jobs in Ireland as it plans new Dublin base
9 Why gift a son now if it eats into his tax-free inheritance threshold?
10 Bewley’s landlord brings action seeking €747,000 in alleged rent arrears
Real news has value SUBSCRIBE