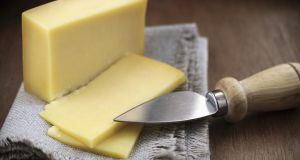 Glanbia reiterated its full-year forecast of between 8 to 10 per cent earnings-per-share growth.

Glanbia now commands 12-13 per cent of the global sports nutrition market, which is estimated to be worth €10 billion, according to managing director Siobhán Talbot.

She said the company’s nutrition business, which targets the sports and health-food industry with protein powders, shakes and bars, made the largest contribution to the group’s latest half-year earnings.

On the back of best-selling brands such as Optimal Nutrition and BSN, the Kilkenny-based food company is now ranked as the biggest global player in the market.

“More and more you’re seeing products like ours recognised by consumers as having a role to play within their lifestyles of health and wellness,” Ms Talbot told The Irish Times.

Revenue in the performance nutrition business rose 12 per cent to €505.3 million on an 8 per cent rise in volume growth and a 10.7 per cent contribution from the thinkThin business, a protein bar maker it bought last year, which offset a 6.7 per cent decline in prices.

Glanbia plc is an international nutritional solutions and cheese group which has its headquarters in Ireland. It has four segments; Dairy Ireland, US Cheese & Global Nutritionals, Joint Ventures and Associates and Other Business.

The group has manufacturing and processing facilities in seven countries and sales/technical support locations in 14 countries. Its core business in food ingredients and nutritionals is predicated on having access to a series of large dairy milk pools, which are then processed into a range of cheese and dairy products.

Top 1000 listing
I found this helpful

The company’s latest numbers show overall pretax earnings increased 11 per cent to €176.5 million in the six-month period. It reiterated its full-year forecast of 8-10 per cent earnings-per-share growth.

The dairy market downturn, which pushed cheese prices down by 8 per cent during the period, saw revenue decline 1.7 per cent to €1.84 billion on the corresponding period last year.

“Global dairy markets remain weak and continue to be a challenge for parts of the business, however the diversity of the Glanbia portfolio has enabled us to navigate this,” she said.

Despite a string of positive global dairy trade auctions, Ms Talbot remained cautious on whether the slump was finally over.

“Our general view is that we’d be cautiously optimistic, but we don’t believe there will be anything overly dramatic [in terms of price change] for the rest of this year.”

The chief downside risks for the business, she said, were weak market confidence and increased currency volatility in the wake of UK vote to leave the European Union. Brexit “has dialled up the level of uncertainty,” she said.

Revenue from joint ventures and associates fell 9.7 per cent in the first half to €403.3 million, led by a 12.8 per cent drop in pricing due to weaker dairy markets that was partially offset by a 6.6 per cent increase in volumes.

The disposal of Glanbia’s interest in Nutricima in April 2015 led to an additional 2.6 per cent decline in revenue compared with the prior half year, the group said.

“Global performance nutrition has remained the engine of growth during the first half,” said Davy analyst Jack Gorman.

Goodbody analyst Liam Igoe said the earnings per share increase in the first half topped his 8.6 per cent estimate.