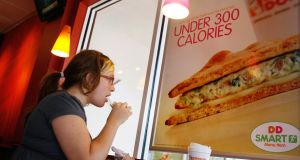 The Reformulation Project report found that between 2005 and 2012, the salt content of the products analysed had been reduced by 37 per cent while sugar content fell by 14 per cent. Photograph: Joe Raedle/Getty Images

Irish food and drink firms have been steadily reducing the levels of fat, salt and sugar in their products in response to public health concerns, a new report has found.

It found that in the seven years between 2005 and 2012, the salt content of the products analysed had been reduced by 37 per cent while sugar content fell by 14 per cent.

Similarly, the amount of energy as measured in calories sold during the period was reduced by 12 per cent.

Both total fat and saturated fat intake were also reduced by approximately 10 per cent, the study found.

Food Drink Ireland (FDI), the Ibec group that represents the sector, presented the findings at a food industry summit in Dublin on Wednesday.

FDI’s director of prepared consumer foods Kevin McPartlan said: “Reformulation is one of the most effective ways in which the food and drink industry can contribute to reducing obesity and improving public health but never before has its true impact on the diet of the entire nation been analysed.

“While personal responsibility will always be the most significant factor in having a healthy diet, by reducing the levels of fat, saturated fat, salt and sugar in our recipes, industry is demonstrating its absolute commitment to play its part,” he said.

In the last budget, Minister for Finance Michael Noonan signalled his intention to introduce a tax on sugar-sweetened drinks in 2018.

During the event, FDI also announced plans to expand the Reformulation Project to also include analysis of the impact of reduced package sizes and fortification of food and drink products with extra nutrients.

This will be included in a follow-up report due to be published by the group next year.

“We will also analyse how changes to package sizes will help reduce the levels of fat, saturated fat, salt and sugar consumed in Ireland,” Mr McPartlan said.

“Food companies are often criticised for smaller unit size, particularly for snack and confectionary products, but small reductions in package sizes reduce portion size and have a positive impact on the national diet,” he said.