Dublin Zoo birds to make a comeback as restrictions lifted 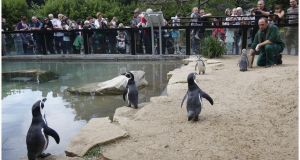 Dublin Zoo said the process of bringing birds back into their outdoor habitats ’will take a number of days’. Photograph: Brenda Fitzsimons

Penguins, flamingos and ostriches will make their comeback at Dublin Zoo in the coming days after months of confinement due to a bird flu threat .

The zoo said it will begin to move birds back into their outdoor habitats following the Department of Agriculture’s decision to lift its regulations on the confinement of poultry.

Dublin Zoo said the process of bringing birds back into their outdoor habitats “will take a number of days” while asking for “visitor’s patience at this time”.

“The wellness of the birds at Dublin Zoo is paramount and we comply with all directives and recommendations from the Department ,” it said.

The change also means that free range flocks will regain their status for marketing free range eggs and poultry meat with additional labelling no longer required.

The Department introduced the confinement on December 23rd, 2016 as a precautionary measure after a case of avian influenza subtype H5N8 bird flu was found on a wild Duck.

The Department said the decision to lift the measure was based on “a number of parameters” which indicate a reducing risk of a bird flu, including the fact that no case of bird flu has been confirmed here in wild birds for eight weeks.

However, only eggs produced and birds slaughtered from April 25th can be marketed as free range. Free range eggs had been marked as “barn eggs” since March 17th.

After the restriction was introduced zoo officials decided to shelter its birds in large “back of house facilities”. Birds relocated inside include eight ostriches, 16 humboldt penguins, 25 waldrapp ibis, five common peafowl, two macaws, a breeding group of 82 Chilean flamingos and a number of chickens and ducks from the Family Farm

The Department warned bird owners that they should not be “complacent” as the virus may still be present in the environment.

“Owners should not be complacent as there is still the possibility of the virus being present in the environment or being transmitted to their flock by wild birds,” it said.

“Bird owners should continue to remain vigilant, monitor their birds for any signs of disease and implement strict disease control measures.”

The Department also advised that birds should be fed indoors or under cover where feasible.