Co-founder of Dunbia crowned EY Industry Entrepreneur of the Year 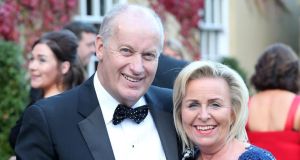 Jack and Grace Dobson from Dunbia at the awards ceremony in City West. Photograph: Maxwell Photography

He is credited with masterminding the company’s stellar rise to become one of the largest meat processors in Britain and Ireland.

The business started life as a small, family-run butcher shop in the Co Tyrone village Moygashel in 1976.

Dobson founded Dungannon Meats, as it was then known, with his brother Jim and father Ted.

The specialist beef, lamb and pork butcher, however, soon expanded to include a nearby slaughterhouse, before developing through a series of expansions to become a major meat exporter.

Rebranded as Dunbia in 2006, it now has sales of €1.15 billion, employs more than 4,000 staff, and includes supermarket giants Sainbury’s and Asda among its growing list of customers.

Dobson has also been instrumental in establishing export markets for animal hides and skins in Europe and Asia, now one of Ireland’s fast-growing trades.

Accepting his award last night, Dobson said he was “flabbergasted” by the win and that he had never received such an accolade in the 50 years since he left school.

And the key to his success? “Just hard work. We never really planned any of this. We just follow opportunities.”

It hasn’t all been plain sailing, however, he said, reflecting on the fact the company lost two-thirds of its business when a big UK buyer pulled the plug on a contract in 2006.

Anne Heraty, chairperson of the this year’s judging panel, said: “It was Jack Dobson’s vision that turned a small, family butcher shop, established in 1976, into now the largest meat processing company across the UK and Ireland.

“With a supplier base of almost 25,000 farmers, Jack is committed to working alongside them to develop a value chain which is sustainable and profitable for all – truly a deserving winner of the Industry EY Entrepreneur of the Year category,” she said.

1 Who are Ireland’s 17 billionaires?
2 State subsidises public sector retirees to cover gap until State pension
3 My father in a nursing home wants to gift me his house
4 Nama lends Cosgraves €15m to fund huge apartment development
5 Health insurance: Switch often for your financial wellbeing
6 Richer countries must do more to tackle climate change, Thunberg tells Davos
7 Countries that fail to attract immigrants will lose out – Microsoft chief
8 Are there annual limits on inheritances or gifts to a child?
9 Trump holds America up as ‘example for the world’ at Davos
10 Property firm sues engineering company over waterproofing of basement
Real news has value SUBSCRIBE