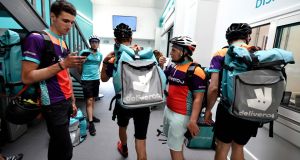 Deliveroo riders waiting for their instructions at one of the company’s first “editions” kitchens in France in July 2018, in Saint-Ouen, outside Paris. Photograph: Gerard Julien/AFP

“Always be eating” is the motto etched on the walls of Deliveroo’s London headquarters – signalling its aim to push food delivery habits so that people will order for breakfast, lunch and dinner.

It’s one of a number of lofty ambitions the food delivery service has. Since its foundation five years ago with just one rider and one restaurant, it’s built itself into one of the biggest players in the sector with revenues of £277 million (€314 million) in 2017.

In its Silicon Valley-esque offices workers dive into Shake Shack and Byron burgers for lunch that they ordered through the platform, each boardroom is named after food and the average age of staff is 28.

Booths are dotted around the office in addition to the ubiquitous bean bags.

Although it still sees itself – and certainly portrays itself to outsiders – as a punchy young start-up, Deliveroo now has to move beyond that image and prove itself.

The food delivery group has moved to introduce a number of new culinary concepts such as “editions”, “Deliveroo plus”, and its marketplace plus solution – a direct attack on its biggest rival.

In Ireland, Deliveroo processes “many thousands of orders a day”, according to its UK and Ireland manager Dan Warne.

Deliveroo is keen to point out the average salary for riders in the Republic is €10.20 an hour, but that those working at busy times stand to earn considerably more. Brexit, too, is likely a concern considering its reliance on non-national workers, particularly in Britain.

The “editions” idea is one that helps further its expansion, allowing it to bring food to areas in which customers have typically been underserved. It also allows restaurants to set up and prepare their food in an area without the initial outlay on bricks and mortar.

That has proven to be attractive both for smaller restaurateurs and large chains alike. Pizza Express – which trades as Milano in Ireland – for example, has taken space in an “editions” site in Hong Kong.

In return for providing space, Deliveroo charges the food outlets higher commission than for companies with their own premises and kitchens.

Deliveroo’s strategy is to find a location off the high street and get chefs into it. If those chefs make a success of it, so does Deliveroo. If they don’t, it’s everybody loses.

The idea came from New-York start-up Maple, which Deliveroo acquired along with the company’s team, including founders Caleb Merkl and Akshay Navle.

The capability of “Frank” – the algorithm that co-ordinates drivers, restaurants and customers – will soon improve by a multiple of 30 times as its decision-making capability is enhanced.

This will allow the company to be accurate about 95 per cent of the time when it comes to live timings.

As the restaurant market changes, Deliveroo appears able to tap into that through the vast data set it holds on its customers and their preferences. For instance, the company knows healthy food is far more popular on a Monday than on a Friday and that its business customers have a preference for healthy food.

This allows it to advise groups taking part in “editions” to launch virtual brands. For example, if a certain company has a strong dinner trade but a poor lunch trade, Deliveroo will help it launch a virtual brand so that it can tap into a different segment of the market under an alternative name with a specially-tailored menu.

It also recently launched food market, which allows a customer to order from any kitchen in a Deliveroo editions outlet – think tacos for a starter and a burger as a main.

And all of these changes come with the company’s new subscription model – Deliveroo plus – which is available in Dublin. The subscription lets customers pay a monthly fee instead of delivery fees on each order.

Delivering food is an increasingly competitive business. Rival JustEat is chasing 5,000 new eateries in the UK while UberEats is offering a similar service.

Deliveroo has more than 900 riders in the Republic and some 600 restaurants. Dublin is the prime focus of its business here.

While a fraction of its global operations – it has more than 50,000 restaurants and riders worldwide – Ireland is an important market.

“It’s a top five city for us [in the UK and Ireland],” says Mr Warne.“It has an affluence level higher than most UK cities.”

With about 1,500 restaurants in Dublin, there is still headroom for growth. Expansion into towns such as Sligo is also on the cards, although this will require another of Deliveroo’s services – “marketplace plus”.

That is something that encroaches on JustEat’s territory and lets a customer order from a restaurant that has its own drivers. While not common on the Deliveroo network, it allows the company to spread its geographical reach without having to rely on rider recruitment in a location like Sligo, where that would prove more difficult than in a city.

Deliveroo Ireland manager Liam Cox is clear about the company’s goals. To keep its drivers busy, it needs restaurants worth eating in.

The company is targeting “the popular restaurants”, according to Mr Cox. And while they come and go, Deliveroo, which last year raised nearly $500 million (€434 million) from private investors, looks like it is here to stay.