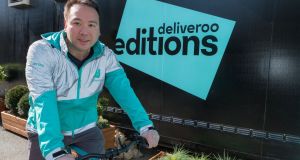 Deliveroo chief executive Will Shu at one of the company’s editions sites.

Deliveroo intends to launch its “editions” service in Ireland at the beginning of next year. Under the service, Deliveroo sets up a number of kitchen facilities at one location, allowing food companies have a base from which to cook food for delivery to nearby customers.

Typically, the food companies do not pay rent or business rates, but pay higher commission to Deliveroo for using the service. Deliveroo already has 200 kitchens in 27 editions sites across the world.

Deliveroo’s delivery radius in Dublin, where the first editions site will be located, usually extends around 2½km for each restaurant. In Dublin it services the majority of areas inside the M50.

Some of its partners in the capital include Fallon & Byrne, Sprout, Boojum and Eddie Rockets. The company, which started as a “premium casual brand”, has pivoted to have a relatively wide-ranging food offering and its editions sites are selected in areas that would most benefit from them.

In addition to companies establishing their existing brand from an editions site, they can also have virtual brands.

A virtual brand appears as a separate restaurant on Deliveroo’s service and may have a different menu to its parent company. The idea is to allow restaurants try new ideas without the need to set up a premises.

Earlier this week, Deliveroo said its Irish arm increased sales by more than 76 per cent last year as its parent company invested in expanding the business here.

Its recently filed accounts show turnover increased to €5.1 million from €2.9 million in the year to the end of December 2017 helping the business become profitable here for the first time since its establishment.

Last year, Deliveroo said it added €15 million to the sale of its restaurant clients and their suppliers, and that it received about 400 job applications a week. Companies such as Deliveroo and Uber Eats typically take a cut of about 30 per cent of the amount spent by the customer on food.