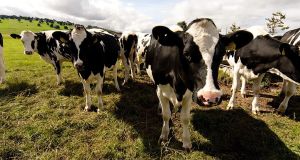 Troubled Northern Ireland dairy LacPatrick is to merge with neighbouring Lakeland Dairies. The amalgamation, which is still subject to shareholder approval, will create the State’s second-largest dairy processor, boasting a milk pool of 1.8 billion litres and an annual turnover of €1 billion.

Monaghan-headquartered LacPatrick has been in exclusive talks with Cavan-based Lakeland since June.

Speculation about its future began earlier this year when the co-op cut the price it was paying farmers for milk, citing market conditions.

The business had borrowed heavily to invest in the business, building a state-of-the-art drying plant at Artigarvan, Co Tyrone, at a cost of €40 million, in advance of the lifting of EU milk quotas.

The boards of both co-ops said they had reached agreement to merge and would now recommend the deal to their respective shareholders.

“ Both co-operatives are highly successful agrifood industry players with excellent manufacturing facilities and complementary strengths and advantages in their various worldwide markets,” they said in a joint statement.

“As an absolute priority, the combined new co-operative will work to support dairy farming families on a long-term basis into the future by maximising market returns and paying a sustainable and competitive milk price in line with market conditions,” they added.

The new business will be supplied by more than 3,200 farmers on both sides of the Border.

Rival dairies Dale Farm, Glanbia and Aurivo had also been touted as possible suitors for LacPatrick, which was formed from a merger of Co Derry-based Ballyrashane with fellow co-op Monaghan Town in 2015.