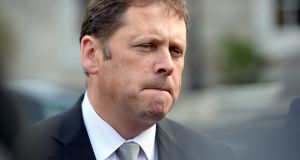 Laois-Offaly Fianna Fáil TD Barry Cowen: he said he was confident the next application would not be refused. Photograph: Eric Luke

Former agriculture minister Barry Cowen said he was confident plans for a €40 million Chinese beef plant in Offaly, which was initially refused government support, will go ahead.

The proposed investment at a site at Banagher Chilling, which was previously used as an abattoir, effectively stalled after the Department of Justice refused an immigrant investment programme application by one of the Hong Kong investors.

The programme, set up in 2012 to encourage inward investment from outside Europe, offers residency status to those who invest €1 million in Ireland for a minimum of three years.

Mr Cowen claimed some of the observations contained in the Department of Agriculture’s submission were inaccurate and have subsequently been refuted.

The Laois-Offaly Fianna Fáil TD said he was confident the next application would not be refused.

Mr Cowen said he had been working with the investors over the past 18 to 24 months on their planning application, which has been approved by the local county council.

The factory, which would have the capacity to process 140 to 150 cattle a day, will produce beef exclusively for the China and the wider Asian market.

The Competition and Consumer Protection Commission wrote to the to the assistant secretary of the the Department of Justice in August, cautioning against “putting in place barriers to entry and exit, which can lower competition and preserve inefficient market structures”.