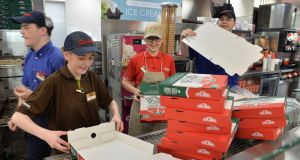 Supermac’s and Papa John Pizza Counter at the Kinnegad Plaza: City centre locations have been hit hard but turnover and footfall in out-of-town outlets has held up relatively well. Photograph: Alan Betson

Ireland’s hospitality sector could take up to four years to recover from the Covid-19 crisis, Supermac’s owner Pat McDonagh has warned.

He described the hit to the sector as “unprecedented”, with sales across his Só Hotel brand likely to be down more than 80 per cent this year.

While closer-to-home tourism from the UK and other European countries might resume in the near future, he said it was unlikely the US tourist trade, which underpins much of the sector, would return to pre-pandemic levels for several years.

Mr McDonagh was speaking as his Supermac’s group announced plans for another plaza-style service station.

The proposed €10 million development, adjacent to the Galway-Limerick motorway and the Limerick tunnel, would be similar to existing facilities such as the Barack Obama Plaza in Co Tipperary,

The plan is to have a service station and food court – with Supermac’s, Papa John’s Pizza and Bewley’s Coffee brands – plus 12 charging points for electric vehicles.

Mr McDonagh said the Barack Obama Plaza gets an annual throughput of customers of about 600,000 and the aim was to achieve half or two-thirds of that in Limerick.

The company is due to submit a planning application to Limerick City Council in the coming days.

The Supermac’s Group, which in 2018 recorded profits of €23.7 million on sales of €172 million, has yet to publish results for 2019. Mr McDonagh’s empire now includes five motorway plazas, six hotels under the Só Hotel brand, and 108 Supermac’s outlets. It employs 2,500 staff.

Mr McDonagh said he expected group turnover to be down in the region of 40 per cent this year with the hotels business the worst-hit. He said Supermac’s restaurants in city centre locations had also been hit hard by the restrictions, with sales down more than 50 per cent in many areas. But turnover and footfall in out-of-town outlets had held up relatively well, he said.

“With no night life, no concerts, no sporting events and limited motorway traffic, this is hardly unexpected,” he said.

Mr McDonagh said the Government’s focus needed to be on helping SMEs. “Some of the businesses that do well in a lockdown like technologies and digital aren’t always the biggest employers. SMEs are,” he said.

“The bulk of Ireland’s research and development tax credit is claimed by foreign companies: we need our Irish companies to do more R&D and claim for it.”