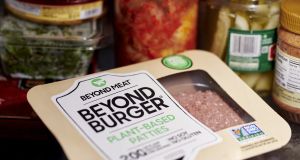 A package of Beyond Meat burger patties on display in Brooklyn, New York. Photograph: Gabby Jones/Bloomberg

A deal with McDonald’s was supposed to be the crowning achievement for fake meat-makers. But one day after Beyond Meat confirmed it has worked with the world’s largest restaurant chain on its new McPlant line, investors are not happy. The maker of plant-based burgers plunged the most in five months after a confusing announcement that was light on details.

An initial announcement by McDonald’s on Monday did not mention Beyond Meat’s participation at all, leading observers to believe that McDonald’s was developing its own substitute meat product. This sent Beyond Meat shares tumbling. Beyond Meat later confirmed its involvement, and shares recovered – at least until its earnings report.

Beyond Meat investors had hoped to get more clarity on the relationship during the faux-meat-maker’s earnings call on Monday afternoon. But chief executive Ethan Brown was stingy with additional details, only saying that Beyond Meat’s role in the McDonald’s development was probably left out of the fast-food chain’s investor day since it was trying to stay on message.

“It’s really up to them to say the extent of that, where it’s going to be, how it’s going to be there,” Brown said. “But everything that I’ve been doing and our research team has been doing is marching toward a particular outcome with them and I feel good about that.”

Beyond Meat did not immediately provide more details. McDonald’s has declined to comment further on the McPlant line or its suppliers.

By declining to disclose financial details ––or any specifics at all about the collaboration – Beyond Meat’s investors have been left to wonder whether the McDonald’s deal will lead to a lucrative ongoing revenue stream or if Beyond Meat had just helped the fast-food chain create a direct competitor to its signature product.

Jefferies analyst Rob Dickerson said the lack of detail around the McPlant announcement, paired with the quarterly miss, “raised a number of questions around BYND’s near-term revenue growth and profitability prospects into 2021” .

Even though the potential tie-up offers upside potential, “we simply don’t know what the timing will be or the profitability of the product”, he wrote in a note.

Compounding the challenges, Beyond Meat reported disappointing earnings after the close of trading on Monday. Beyond Meat revealed a surprise loss for the third quarter, and missed even the lowest analyst estimate for revenue.

The mix of confusion and disappointment drove Beyond Meat’s shares down as much as 25 per cent on Tuesday in New York, the biggest intraday slide in about five months. The stock had nearly doubled in value this year through Monday.

Investors do not even know what is in the burger. Beyond’s classic recipe is primarily pea protein, though McDonald’s has not clarified whether it’s using the same ingredients or a different mix of protein and spices.

McDonald’s international president Ian Borden said on Monday the burger would be “crafted exclusively for McDonald’s by McDonald’s”, suggesting it will not be the same exact Beyond Burger currently available in grocers.

If it does use the same peas, or pulses, as Beyond Meat’s version there is at least one clear winner this week from the confusing announcement: the farmers who grow the crop.

“We are obviously thrilled to have McDonald’s finally join the family of plant-based meat alternatives. They are certainly following a very strong trend,” Tim McGreevy, CEO of the USA Dry Pea and Lentil Council and the American Pulse Association, said in a phone interview.

Having a company with McDonald’s global reach means this is a “big day for all of the farmers who produce pulse crops”. – Bloomberg