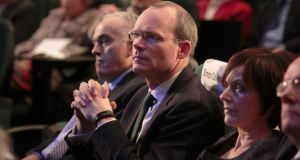 “In April, the shackles will come off.” This was how Minister for Agriculture Simon Coveney described the imminent ending of EU milk quotas.

Speaking at the launch of Bord Bia’s latest Export Performance and Prospects report, Mr Coveney suggested Ireland will now finally be able to fulfil its potential as a milk producer.

There’s a strongly held belief that Ireland could have been the New Zealand of the Northern Hemisphere had it forged a different path.

The two countries have similar-sized populations, share a similar climate and are blessed with an abundance of grassland, making them ideal for dairy farming.

Prior to the introduction of milk quotas in 1984, the State produced roughly the same volume of milk as New Zealand, about 5 billion litres a year.

However, after 31 years of EU market intervention, Ireland now produces 5.5 billion litres while New Zealand produces 20 billion litres, making it the biggest per-capita producer in the world. It’s a comparison than rankles with many.

The authorities here are targeting a 50 per cent increase in production by 2020.

“[In the post-quota era] we will to able to produce the right amount of milk that this country has the capacity to sustainably produce – to target markets for premium added-value products across the world,” Mr Coveney said.

However, the free market comes with its perils and at the moment Ireland’s 17,500 dairy farmers are getting something of a cold shower in the form of plummeting prices. Base milk prices here have fallen by 8 cents (21 per cent) to 30 cent per litre in recent months.

Mr Coveney said price volatility will be the main challenge for farmers going forward. With bumper price growth of recent years, he said it was hard to convince farmers of the benefits of price hedging. However, these hedging structures – already being utilised with some success by Glanbia – are likely to become a commonplace feature of the Irish dairy sector in the post-quota era.