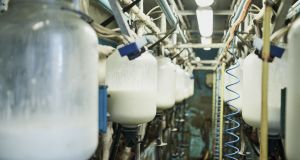 Before being promoted to the role of business director, the man was employed as sales manager and was responsible for liquid milk North and South. Photograph: iStock

A business director at a dairy company, who was arrested for suspected car theft by the PSNI after failing to return his company car, has been awarded €35,000 for his unfair dismissal.

Workplace Relations Commission (WRC) adjudication officer, Emile Daly found that a genuine redundancy situation did not exist and that the man was unfairly dismissed.

However, the business director – who lives in the North – was arrested by the PSNI in March 2018 after his former employer had reported its company car stolen.

The man had retained the company car after his dismissal.

At the WRC hearing, the business director accepted that his former employer wrote to his solicitor several times requesting that the car be returned.

On a number of occasions, his former employer threatened to report the matter to the Garda if he did not return it. The employer eventually made the report to the Garda in March last year.

The business director then contacted the Garda and made an arrangement with them to return the car.

However, that day, when the man crossed the Border into the North, the PSNI was alerted by the car’s registration that it had been reported as stolen.

The PSNI arrested the director and from March until October 2018 he was under the threat of prosecution for theft before he was told that no prosecution would be made.

The car was returned to the dairy firm immediately after the arrest and confiscation of the car by the PSNI.

The man felt that he was treated very poorly by his former employer. He said that from March onwards that the potential for criminal proceedings for car theft affected his ability to mitigate his loss as potential prospective employers were not comfortable.

The man – who was on a salary of €70,000 in his business director role – applied unsuccessfully for some 70 jobs since his dismissal and has eventually secured a driving job.

In her findings, Ms Daly did not accept that the complainant had a right to retain the company car following his dismissal.

She said his belief that his actions were legitimate as pre-litigation positioning against the company were misconceived and should not have been facilitated by his legal adviser.

Ms Daly said the business director may have been upset with how the dismissal occurred and he may have felt that the employer’s actions of promoting him in order to dismiss him were cynical. However, she said, “while such emotions are understandable and while his judgment of their conduct was not without some basis, this does not give permission for wrongdoing on his part”.

Before being promoted to the role of business director, the man was employed as sales manager and was responsible for liquid milk North and South.

On July 21st that year, the firm’s HR manager told him that he was being made redundant and that there was no possibility of being re-deployed.

Explaining the rationale behind the redundancy, the firm told the WRC hearing that the company’s structure needed to be flexible and the role the complainant had was redundant because it could be absorbed into the responsibilities of his line manager.

In her findings, Ms Daly found that no evidence had been put before her which showed that a redundancy situation existed and no reasons had been given as to why the chief executive decided that the man’s position should be made redundant.

Ms Daly said that the complaint of unfair dismissal was well founded and ordered the firm to pay the man €35,000.