Black pudding from farm to fork

Clonakilty Blackpudding Company will next year open a visitor centre 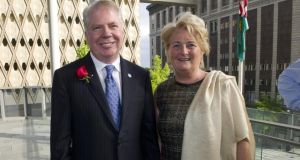 Colette Twomey, who owns Clonakilty Blackpudding, was recently in the US with this year’s EY Entrepreneur of the Year hopefuls where she met Ed Murray, the first openly gay mayor of Seattle

Clonakilty Blackpudding Company, the west Cork maker of the famous bloodied breakfast item, will next year open a visitor centre as part of a new factory complex it plans to build on a six-acre site in the town.

I can’t wait to see the look on tourists' faces if they witness the entire production process from farm to fork.

The company recently obtained planning permission for the development. The site was originally owned by Cork developer John Fleming, who later went bankrupt, before it was sold to the food company in January by a PWC receiver.

Colette Twomey, who owns Clonakilty Blackpudding, says construction will begin in September and will take up to 12 months.

The company employs almost 50 staff, scattered around various sites, mostly in Cork city. The new development brings it all back to the town that gave the pudding its name.

“It’s 15 years since we moved to Cork city and that was only meant to be temporary at the time,” says Twomey, who was recently voted the mayor of Clonakilty in an election organised by a local group to coincide with the formal abolition of town councils last week.

Twomey tells me the company is targeting major growth in Britain, where it is on the shelves of all the major supermarket chains. “We also send some to Dubai and Hong Kong – anywhere there’s a few Irish expats,” she says.

Australia doesn’t allow the importation of black pudding, so Clonakilty recently struck an agreement with a local manufacturer. The US also remains off limits as a potential export market.

Twomey, a past finalist in the EY Entrepreneur of the Year contest, was recently in the US with this year’s EY hopefuls. Here she is (above) pictured with Ed Murray, the first openly gay mayor of Seattle.

1 How much state pension will I get next year?
2 Oxford Covid vaccine trials offer hope for elderly
3 Tesco takes to the skies with home delivery by drone
4 Apple planning updates to its AirPods earbuds next year
5 Covid-19 will worsen shortage of accountants, says CPA Ireland
6 Outgoing Irish a sitting duck for Covid
7 Ulster Bank to introduce new card payment controls on app
8 State has won more than 80 Brexit-related FDI projects
9 Aryzta to pursue asset sales as takeover talks fail
10 How to . . . move (almost) everything to your new phone
Real news has value SUBSCRIBE