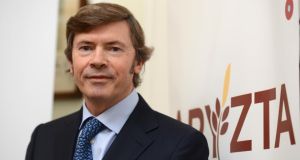 Shares fell sharply in Aryzta on Monday as the embattled food company announced half-year results including a 2.8 per cent revenue decrease to €1.9 billion.

The company also announced that three of its top executives would be gone by the end of March rather than the previously mentioned July departure date.

Earnings before interest, taxes, depreciation and amortisation (ebitda) declined by 31.3 per cent to €158.5 million for the six months to the end of January, it said on Monday, and the board is unable to provide guidance on future performance.

Their original departure date announced last month was due to fall by the end of July.

Aryzta’s board of directors has appointed David Wilkinson as interim chief financial officer with immediate effect.

Mr Wilkinson is a senior partner at KPMG in Dublin and is currently head of the advisory practice in Ireland.

He is joining the company on secondment from KPMG to support the management team during the transition process.

Underlying net profit at the company decreased 22.4 per cent to €109.4 million.

In its statement, Aryzta said it had continued with strong cash generation of €99 million and reduced its financing costs by €26 million.

A strategic review of its joint ventures is also under way and, in light all of the current circumstances, the board said it was not in a position to provide guidance.

Last month, the managing director of Aryzta’s European and Asia-Pacific bakeries operation, Frank Kleiner, became the latest executive to announce his departure with the group facing unprecedented restructuring after a string of profit warnings in January.

Mr Wilkinson will report directly to the chairman of the board until a new chief executive is appointed.

Speculation has already built around potential candidates for the chief executive role, with prominent names including Hilliard Lombard, Aryzta’s former European boss, who left early last year to become managing director of the Irish business of Valeo Foods, owner of the Batchelors and Fruitfield brands.

Greencore chief executive Patrick Coveney has also been mentioned, although sources previously indicated the role would be unlikely to appeal to him.

Trouble at Aryzta, the owner of Cuisine de France, began around March 2015. At that point stock was sold off after the company posted weaker-than-expected results.

A subsequent series of profit warnings and disappointing earnings, largely as a result of problems in the US operations, has seen Aryzta’s market value plunge by 53.5 per cent over the past two years to 2.93 billion Swiss francs (€2.75 billion).