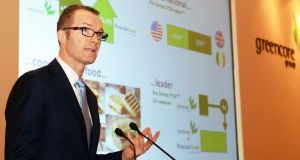 head of investor relations, after the sandwich- and chilled-meals maker expanded its shareholder base through a share sale in December to complete a transformational $745.5 million (€702 million) US acquisition.

“This new role reflects the changing and growing nature of Greencore’s business,” a spokeswoman for the company said. “Jack will take the lead in managing and developing Greencore’s relationship with the investment community, ensuring they have a clear understanding of the group strategy, performance and prospects.”

The market value of Greencore has risen by more than 6 per cent so far this year, to £1.84 billion (€2.1 billion), following the group’s purchase of Illinois-based Peacock Foods. The deal, which was funded by debt and a £439.4 million share sale, adds $1 billion of sales, quadrupling Greencore’s US revenues.

However, the deal brought on a number of new institutional investors, many of whom are said to have voted against chief executive Patrick Coveney’s new remuneration packaging, which hikes the maximum long-term share bonus to which he may be entitled.

Some 40 per cent of investors who took part in the vote at Greencore’s annual general meeting in January rejected the company’s plan to double the number of shares that could be granted to Mr Coveney under a so-called performance share plan, to 200 per cent of salary, for the year to September. The group’s chairman, Gary Kennedy, signalled after the vote that it would re-engage with investors on remuneration.

Mr Gorman comes to the new role of head of investor relations having worked with Davy’s equity research arm since 1994, most of that time covering an analysing international food companies. He will join Greencore in May and will be based in Dublin, according to the company spokeswoman.

Mr Gorman declined to comment when contacted by The Irish Times.

Greencore’s earnings before interest, tax, depreciation and amortisation rose 42 per cent to almost £197 million in the company’s current financial year to the end of September, on the back of 57 per cent sales growth to £2.33 billion.

1 Majority of employees don’t want to return to pre-Covid working patterns
2 Homeworking is depriving me of juicy gossip
3 Primark rejects £30m bonus for bringing back staff
4 If tourists are such pariahs should we not be testing them on arrival?
5 Investors in Irish solar energy fund in line for €20m payout
6 The $6bn judgment pitting Nigeria against Irish businessmen
7 Tobacco giant’s menthol-ban substitutes take 5% share of Irish market
8 Varadkar and Donohoe to meet banks to discuss mortgage breaks
9 ‘My rent here is so low it’s a joke’
10 Construction activity rebounds as sites re-open
Real news has value SUBSCRIBE