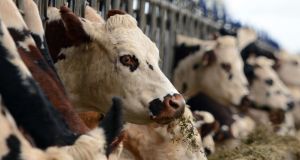 Confidence is strongest in the dairy sector, with 90 per cent of businesses saying they are either confident or very confident. Photograph: Getty Images

More than a third of leaders in the Irish agrifood sector feel their businesses are not competitive in international markets.

And while Brexit is cited as the biggest challenge facing the sector, alongside volatile prices, fewer than three in 10 companies plan to enter a new market this year.

The findings come from a survey of business leaders for the seventh annual Farmers Journal/KPMG Agribusiness report.

Companies argued that red tape and the cost of regulatory compliance were the main factors for them failing to be competitive with international rivals. The issues were cited by 90 per cent of respondents, far ahead of other traditional concerns such as energy costs, Government support and currency volatility.

Brexit, which was identified by one in five respondents as the biggest challenge facing their business, is, they say, forcing them to stall decisions on investment and on capital projects.

That partly explains the low number, 29 per cent, eyeing up new markets for this year, the survey says.

Of those companies looking at geographic expansion, Asia (32 per cent) and Europe (27 per cent) are the main targets. Some 17 per cent say they plan to take on extra staff during the year but only 7 per cent intend to invest in research and development in 2019.

Overall, despite the worries about Brexit, almost 50 per cent of respondents described their business outlook as confident, with a further 15 per cent saying they were “very confident”. Just 8 per cent have a negative outlook on what the year holds for them.

Confidence is strongest in the dairy sector, with 90 per cent of businesses saying they are either confident or very confident. The same cannot be said for those in the meat sector, where Brexit weighs heaviest and just over a quarter of respondents (27 per cent) say their outlook is confident.

1 Aer Lingus confirms job cuts due to ‘decimation in demand’
2 Major credit union plans to limit savings accounts to €40,000
3 Why is Germany suddenly embracing its inner Keynesian?
4 Passengers face queuing in car parks at Dublin Airport
5 Domestic economy may get boost from multinationals
6 Student accommodation sector set for harsh Covid-19 lesson
7 Slack lease the lure as ESB seeks €168m for Fitzwilliam 28
8 In six months we will be in the grip of a 1980s-style recession
9 Open Orphan launches Covid-19 antibody testing service
10 Revenue tells court it was entitled to raise €1.64bn tax assessment against Perrigo
Real news has value SUBSCRIBE