Agriculture courses back in vogue at third-level colleges 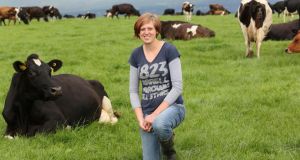 Sarah Claxton grew up on a farm and always loved the idea of farm work, but she was discouraged from following her father into the business on the grounds that it wasn’t financially prudent. Photograph: Mary Browne

As Leaving Cert students prepare to collect their results this week, increasing numbers will be hoping to bag a place on an agriculture or food course. Recent CAO statistics show these courses have experienced the steepest rise in demand in 2013, up by 10 per cent.

Secondary school students eyeing up an apparently jobs-rich sector have pushed up CAO points for entry to farming courses. Seven years ago, 315 points would have secured a place in the UCD school of agriculture and food science, but that has since jumped to about 450.

For September 2013, the school received 4,217 applications, a 65 per cent increase when compared to 2003. “Students . . . are seeking out programmes where there are likely to be very good opportunities,” says Prof Alex Evans, UCD dean of agriculture.

However in recent years a trend has emerged which has seen mature students also turning to farming, often as a change of career or study because, while employment has been drying up in other sectors, farming is still perceived as a growth area.

Large employment announcements, such as Kerry Group’s decision to create 900 new positions (based on cutting-edge development in R&D and innovation) in Naas, create obvious appeal.

There is now “huge interest in issues such as how our food is produced, what’s in our food, food provenance, food safety, how producers and consumers organise themselves, and how they interact with one another,” says Dr Olive McCarthy from the department of food business and development at UCC. Her colleague, Prof Paul McSweeny, has also noticed “a drift for many years towards more students from non-farming backgrounds in our programmes”.

Áine Barry from Cork city lives in Dingle, Co Kerry, where – among other things – she is developing a cosmetics line using locally harvested seaweed. The route that led her there though was a circuitous one.

She studied arts in UCC back in 1996 and, from there, did a Fás computer course, after which she decided to embark on a career in media. She landed a temping job on the newsdesk of the Financial Times in London and went on to work in the newspaper’s graphics department.

Five years later she had had enough of the bustle of central London and decided to return to Ireland. She headed to Dingle, where she worked as a massage therapist for a few years. During that time she became intrigued by the entrepreneurial and community spirit in Dingle and other rural areas.

Rural issues
“I really could never get that out of my head,” she recalls. “I became more interested in rural issues and farming life, how people sustained their livelihoods and how they coped with the adversity from the recession bringing further challenges like emigration and poverty.”

She went back UCC in 2009 to take a master’s in rural development, food marketing and co-operative organisations, basing her research thesis on Dingle and the entrepreneurial activity in the region since the onset of the recession.

The artisan food industry, thriving in west Cork and Kerry, also inspired her to set up her own seaweed-based cosmetics line. As the Government attempts to bolster Irish aquaculture, Barry believes there is “so much potential” in seaweed.

“Every day I’m walking around here. I go to the beach after work and it just cracks me up because I’m seeing seaweed everywhere and I’m like, ‘oh, people should be doing stuff with this’. I think in the next few years people will grab on to the idea more but to me, I just want to shout at people to try to get into it.”

While Barry’s interest in rural entrepreneurship came about almost as a reaction to fast-paced London life, Sarah Claxton grew up on a farm and always loved the idea of farm work, but she was discouraged from following her father into the business on the grounds that it wasn’t financially prudent. Instead she went to Waterford IT where she studied psychology for three years. When she finished that, however, she was still “mad into farming” and knew she wouldn’t be satisfied with a different career.

Her father had bought in some calves the previous year and, realising his daughter wasn’t going to be deterred from farming, told her if she reared them and took responsibility for them and stuck at it, she could work on the farm. Sure enough, Claxton “stuck at it and reared the calves and he said: ‘Fine, go on’.”

She did the advanced cert in dairy herd management at Teagasc Kildalton Agricultural College and now works on the 300- acre family dairy farm in Stradbally, Co Waterford, full-time.

Your own boss
“I love it,” she says. “It’s great really. In a way you’re kind of your own boss. You get up, you know your routine and every day is something different, something new.” She adds that she enjoys the “sense of freedom” she gets on the farm.

Claxton, who turns 24 in October, believes she’s not alone as a young person getting into farming. “There’s a lot more young people getting involved,” she says. Something she puts down to a lack of jobs elsewhere.

Whatever people’s reasons for returning to the land, Claxton is glad she made the move.

“I love animals and the outdoors and the lifestyle, everything about it from the smells to the noises; I’m in love with farming really.”

1 How much state pension will I get next year?
2 Housing crisis here to stay in absence of big rethink, industry warns
3 PTSB plays down Ulster Bank talk as it sells €1.4bn of loans
4 Up or down – how much is your Local Property Tax this year?
5 Am I crazy to consider switching to an Ulster Bank mortgage?
6 Brexit to curb services trade with UK, accountants group warns
7 How long can Government afford to keep State pension age at 66?
8 Ireland’s €200bn debt burden: how did we get here?
9 Hit to Irish economy from coronavirus likely to be minimal, Central Bank says
10 Mortgage drawdowns fall by almost a third compared to 2019
Real news has value SUBSCRIBE