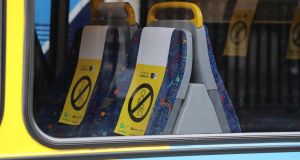 Social distancing on Dublin Bus. The Central Bank has warned that the coronavirus crisis is likely to blow a €22 billion hole in the State’s finances. Photograph Nick Bradshaw

The Central Bank has warned that the coronavirus crisis is likely to blow a ¤22 billion hole in the State’s finances and could see half a million people losing their jobs. Eoin Burke-Kennedy has details of the grim outlook, which is contained within the bank’s latest quarterly bulletin. He also reports on how much worse things could get if lockdown persists, and, in an analysis, reflects on how quickly coronavirus has brought economic activity to its knees.

Eoin has details too off the shock Covid-19 has already wreaked on the exchequer and on joblessness.

Joe Brennan reports on how the ECB has put the brakes on plans by foreign-owned Irish lenders to pay big dividends to their parents this year. KBC Bank Ireland is among those affected.

Joe has also been looking at Denis O’Brien’s Digicel, which is in the midst of a complicated debt restructuring effort. The plan could result in Mr O’Brien handing over 49 per cent of the mobile empire.

Peter also travelled west to Westport in Co Mayo, taking the commercial temperature of the well-known tourist town as it battles the impact of Covid-19. “The timing couldn’t have been worse,” one business veteran tells him.

Mark Paul has an idea to help get our collective finances back on track as the crisis plays out: Paschalbonds. He has considered the idea of the State providing so-called helicopter money, whereby stimulus cash is liberally sprinkled over tired, sad economies with the aim of kickstarting spending. Rather than just depositing such cash into our bank accounts, however, he reckons it should come in the form of vouchers with a short expiration date. This would naturally create a fillip in spending as we all rush to satisfy our consumer urges at the same time, rather than letting the helicopter money meld into what remains in our wallets and be kept for a rainy day.

John FitzGerald is less convinced by the idea of anything resembling helicopter money, but he does bring a tiny note of near-optimism with his hope that the government borrowing needed to bring us through Covid-19 won’t be as extensive as that needed after the financial crisis that is still fresh in our memories.

And finally, with so many of us now working from home, it’s easy to presume that our usual systems and structures are working without actually checking properly that they are. Olive Keogh writes today that this is a time for managers to show greater leadership, while home workers need to establish a daily pattern and, possibly most crucially, stick to it.

US retailers step up security and close stores after looting 18:04
World stocks climb to three-month highs despite US unrest 18:03
Danish jeweller Pandora to use only recycled silver and gold 17:52
ECB set to expand bond-buying to soak up debt 17:39
Apple tax case: Four individual lawyers paid over €500,000 each 17:15

1 Should my mam wait for house prices to drop before buying?
2 Apple tax case: Four individual lawyers paid over €500,000 each
3 Parts of Brown Thomas and Arnotts to reopen next week
4 Irish comic book artist designs face mask coverings for young flyers
5 Thailand attempts to lure travellers with luxurious lockdown options
6 Irish whiskey sales near milestone of 12m cases a year
7 ‘I have a talent for justifying purchases’
8 Covid-19 mortgage breaks: What’s the catch?
9 Brother is dragging his heels as executor of uncle’s will - is there anything I can do?
10 ECB set to expand bond-buying to soak up debt
Real news has value SUBSCRIBE