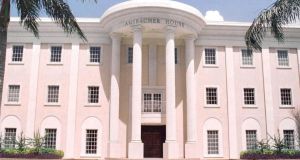 Ansbacher House in the Caymen Islands. Ansbacher was a bank in the Cayman Islands, but the nominally offshore money in the deposits was in fact held in Guinness & Mahon Bank on Dublin’s College Green

Subsequent inquiries by the Revenue Commissioners yielded about €113 million in back taxes and penalties from account holders.

However, Gerry Ryan, who was the authorised officer charged originally with investigating the issue, has claimed there existed an even more secret set of Ansbacher accounts dating back to the 1970s which were held for the benefit of other very senior former politicians.

He told the Dáil Public Accounts Committee in a dossier sent to it last month that details of these accounts were held in a “black briefcase” and had never been made known publicly.

Ansbacher was a bank in the Cayman Islands, but the nominally offshore money in the deposits was in fact held in Guinness & Mahon Bank on Dublin’s College Green.

Official investigations found the Cayman trusts were under the control of the Irish people who placed money in them. The supposedly offshore money could be withdrawn by the wealthy depositors at Guinness & Mahon’s premises in Dublin.

Ryan maintained his investigations were terminated in July 2004 by the then minister for enterprise and employment, Mary Harney.

He said he told Fianna Fáil leader Micheál Martin, who succeeded Harney as minister in that department, that “a huge effort was made by certain persons to ensure that evidence of senior Fianna Fáil TDs’ Cayman Islands accounts never came to light”.

She directed that material which Ryan had gathered should be handed over to the Moriarty and Mahon tribunals.

Ryan said he was unable to examine documents due to be delivered to him by Allied Irish Banks relating to very substantial offshore accounts in the name of Credit Suisse (Guernsey) Ltd.

He said most of this money was beneficially owned by Irish residents.

He said that in late 2003 and early 2004, as a result of detailed examination of records and interviews with former Guinness & Mahon employees, he obtained evidence confirming the existence of the “black briefcase”.

This contained details of Cayman Islands accounts held mainly for the benefit of senior Fianna Fáil TDs at the time.

The staff member, he said, would match up these lists with sellotape when Des Traynor, who was on the board of Guinness & Mahon, would ask for a list of the balances.

“The listing of names of the beneficial owners of these Cayman accounts was always kept in a separate safe to the list of the balances so that, if one fell into the wrong hands, no one would be able to match the senior politicians with their account balances,” he wrote.

In his dossier, Ryan named nine senior Fianna Fáil politicians of the time as being Cayman account holders.

According to him, a bank official had recognised the name of a prominent Fine Gael politician as being the beneficial owner of one of the accounts.

He contended there had been Fine Gael connections to Traynor which had not been examined by various investigations over the years.

1 Are there annual limits on inheritances or gifts to a child?
2 Ireland has EU’s most progressive tax system, study finds
3 Who are Ireland’s 17 billionaires?
4 Netflix isn’t threatened by Baby Yoda and has the chart to prove it
5 My father in a nursing home wants to gift me his house
6 Irish workers now ranked as most productive in world
7 Davos Diary: UCD prof goes batty, Ivanka hits town and Prince Charles takes the stage
8 Inbreeding poses major threat to Ireland’s thoroughbred horse sector
9 IDA chief says State could soon ‘be fighting for a smaller pool’ of foreign investment
10 London fintech group Nucoro to expand in Ireland
Real news has value SUBSCRIBE