Challenges of life as a researcher

Pressures such as publishing papers and funding can weigh heavily 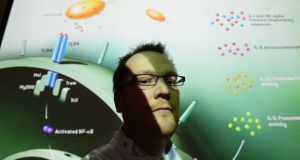 Dr Kieran Meade, a senior scientist at Teagasc, considers himself to be one of the lucky ones. “I had a relatively short post-doctoral research career of four years before I was made permanent in Teagasc,” he explains.

Meade is funded through Teagasc, the Department of Food and Agriculture and Science Foundation Ireland for his work on bovine immunology, which is looking to prevent disease in livestock through a better understanding of their immune responses.

The short-term nature of post-doc contracts can make it difficult for non-permanent scientists to stay in the system, whether for career progression or family reasons, according to Meade.

“We generate these highly skilled people with new, cutting-edge ideas, but we make them wait, often for many years, before they can fund, research and translate those new ideas,”he says.

“I suspect it also means that we lose a high number of those talented individuals to science who cannot see a future in short-term contracts.”

Dr Sarah Doyle has recently made the leap from an immunology lab at Trinity, where she was working as a post-doc, to a lectureship position at Our Lady’s Children’s Hospital in Crumlin, where she is setting up a group to study children’s immune responses to infection.

Doyle made a conscious decision to stay as a post-doc for six years in the Trinity lab, but she admits that was a risk.

“As a researcher you are expected to work in different labs to build up your experience, even though that doesn’t always gel with family life,” she says.

But the strategy paid off because the principal investigator in the lab gave her the freedom to develop her own lines of research. “I got the chance to become a bit more independent,“ she says.

“It would be good to see more post-docs being supported by their schools as independent researchers. That would offer more of a stepping stone to a lectureship – at the moment there is really no bridge.”


Publish or perish
Another sticking point, expressed by a researcher who did not want to be named, is the pressure to publish papers in scientific journals in order to be eligible for research funding.

Science Foundation Ireland now requires applicants for more senior awards to have at least 15 papers where they are a first or senior author.

The mid-career scientist has already published several well-cited papers but will take another few years to reach that magic number of 15, and feels quality should be taken into account too.

“I do really hope that SFI will introduce some measures to also consider the quality of an applicant’s papers – a reasonable suggestion would be to have a scientific panel to judge on scientific quality, as the Wellcome Trust and the European Research Council have.”

SFI set the bar at 15 publications as a “triage” mechanism, explains the agency’s director general, Prof Mark Ferguson. “The investigator programme is for established investigators and it is not fair to ask early-stage people to compete in the same field as established peopleleyou use different criteria,” he says.

“Is the ‘15 papers’ a perfect criterion? Of course not, no criterion is perfect, but it is a pretty good approximation. We will we review it at the end of this year, but last year the average number of papers by a successful applicant was 40.”


Funding for young investigators
With SFI’s announcements last month of 85 individual investigator awards worth €60 million and seven academic/industry “hubs” being funded to the tune of €300 million, Ferguson says we are seeing the “mature end” of investments rolling out first, and that changes are on the cards for younger researchers too.

“We aim to increase our support of younger researchers by 50 per cent over the coming years,” he says.

Existing funding mechanisms include the President of Ireland Young Researcher Awards (PIYRAs), which are not numerous but they offer as much as five years of funding to help researchers establish a lab in Ireland.

Another scheme, SFI’s Starting Investigator Research Grant programme, currently looks to support researchers who have three to eight years under their belts since the PhD, and Ferguson expects the net to broaden on that one.

And for those who have taken time out from research to have a familypu, the eligibility criteria are relaxed accordingly, says Ferguson.

But he notes that some funding opportunities aren’t being picked up. “In the biomedical area, some of the Wellcome Trust schemes that support young investigators are open to applicants in the Republic of Ireland and are co-funded by us,” he says.

“But in the last round there were zero applications from the Republic of Ireland.”

More generally, Ferguson would like to see more “joined-up thinking“ between the funding agencies and academic institutions, and more education for PhDs and postdocs about opportunities outside of academia.

“Because that is where the vast majority of them will go,” he says. “And I think sometimes they are unaware of the valuable skills they have that are transferrable outside of academia.”


PhD skills get some structure
One of the big educational changes is the structured PhD programme, which is being adopted more widely in Ireland, particularly in science and engineering faculties, and which looks to encourage more broad skills training, explains Dr Lisa Looney, dean of graduate studies at Dublin City University.

“The traditional model for the PhD was essentially an apprenticeship model,” she explains. “That was fine for people who were heading for careers in academia, but the number of PhD graduates has increased hugely in the last few years and they are not all going to get jobs in academia – the employment of these PhD graduates is going to be much more varied than it has been in the past.”

The surge in PhDs is mainly down to the national policy on science and technology looking to increase the numbers of graduates trained at that level, explains Dr Looney.

The structured PhD in science or engineering lays out a more defined path and includes generic training in communications skills and entrepreneurship as well as research methods and statistics, and also more discipline-specific training for their own field.

“Through the structured programme we are trying to let the students know it is a big world out there and they have a lot to offer,” says Looney.


Greater flexibility needed
The academic career path can be a challenging one to integrate with family life, particularly as early-to-mid stage researchers often need to travel to build up their expertise, notes Looney.

Plus the pressure to publish can be intense, and researchers who move into more managerial roles in the lab can lose out on their publication record even though they are learning important skills. So she would like to see more flexibility in how career paths are judged.

“I think there is a single model of the successful researcher – get the PhD young and early, churn out publications quickly afterwards then move to senior author publications,” she says.

“We haven’t really developed a more sophisticated model where career velocity is not the thing, and I think the Americans are probably ahead of us on that, where you can move back and forth between roles and there’s a realisation that other things are happening in your life too.”