Whiskey wonderland: what we’re buying everyone this Christmas 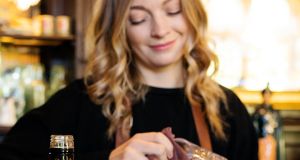 It’s a situation that we find ourselves in every year - the struggle to find Christmas gifts for our nearest and dearest who are, quite simply, impossible to buy for.

Irish whiskey, which is continuing to take the world by storm, fits the bill as a truly authentic gift that can be tailored to family, friends and co-workers. Hannah Osborne, one of the resident experts at the Irish Whiskey Museum on Grafton Street, tells us the Christmas gifts that she’ll be buying this year.

There are over 100 different types of Irish whiskey in the Irish Whiskey Museum, so you’re not short on choice! There’s something to suit everyone’s taste and plenty of little extras that will make everyone’s stocking that little bit more exciting on Christmas morning. Whiskey has such a rich history in Ireland. The four main styles sold at the Irish Whiskey Museum: blended, single grain, single malt and single pot still, means that there are a variety of price points to choose from and a selection that will suit everyone from your best friend, to your partner, to the uncle you haven’t seen since last Christmas.

This year, we’ve put together a selection of whiskey miniature gift sets available to buy in-store. You can select any of our whiskey miniatures as part of the set and they come gift-wrapped. hey take the hassle out of buying an assortment of little gifts.

My favourite has got to be the Irish Hot Chocolate Gift Set; it’s only €15 and includes a whiskey miniature, Butler’s Whiskey-flavoured Dark Chocolate and an IWM travel mug. It’s perfect for Kris Kindle! I’m also going to buy the Whiskey & Marmalade Gift Set as a stocking filler which includes a whiskey miniature, IWM Marmalade and a glass for €20.

Our number one bestseller is Powers Gold Label. It was the first Irish whiskey to ever be bottled and is one of a handful of brands that continued to trade in the 20th century despite American prohibition, Irish independence from the UK and World War II. Gold Label is matured in ex-bourbon casks and, while it is actually a blended whiskey, it’s predominantly pot still; giving it the distinct spiciness that makes this homegrown style so popular across the globe. You can pick up a bottle for €35.

Next up is one of my ultimate favourites: Redbreast 12 Year Old Single Pot Still. It won the worldwide Whiskey Trophy 2019 in August after scoring an incredible 98/100 and is the largest selling single pot still whiskey in the world. It’s also often referred to as Christmas whiskey, due to the fruit sherry casks that it is matured in, so that’s always a bonus. I’ll be buying a bottle for my boyfriend because I know he will love it and hopefully he’ll be happy enough to share a few glasses with me.

Grace O’Malley Blended Whiskey launched into the market earlier this year as the first whiskey in their range. It’s an exciting new spirit brand with a great Irish story, named after the famous Irish pirate queen. I’m going to pick up a bottle for my mother because Grace O’Malley was one of the strongest female characters in Irish folklore; she won battles, negotiated with queens and was the original girl-boss of the west coast.  The whiskey itself is light and sweet with orchard fruits – I also think that it has a slightly honeyed finish.

If you have a friend or relative that’s a serious whiskey lover, then the release of Writers’ Tears Double Oak back in May will have been on their radar. It's a blended with smooth vanilla tones that make it more accessible to whiskey novices. What makes this whiskey different is that its matured in both French and American oak casks, so there are citrus and plum notes woven into the flavour profile. It was made in close collaboration with the Lagaret family, so this whiskey would also appeal to brandy drinkers.

We also received the Limited Edition Knappogue 21 Year Old Single Malt last month which would make a really special present as there have only been 1,200 bottles produced. It has a higher price point of €190 but it’s worth every cent for the complex malty sweetness, pastry notes and baked apple spices. It’s a real treat.

You can visit the Irish Whiskey Museum at 119 Grafton Street, Dublin 2 every day between 10am and 6pm. Both the Whiskey Store and Bar are located on the 1st floor by reception where staff are available to answer your questions.