SXSW: 10 ideas from the leading lights in the Lone Star state

South by Southwest draws the world’s brightest minds to Texas every year for a festival of ideas and culture: here’s what we’ve learned so far 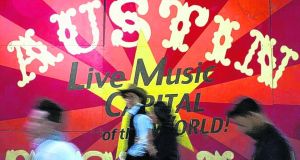 There are many reasons why 45,000 people turn up at the South by Southwest (SXSW) festival in Austin, Texas every year. Over the course of 10 days, you can feed your head with as many of the 5,000 official events – and countless unofficial events – as you can handle. You could conceivably spend every waking moment at talks, interviews, panels, discussions, showcases, screenings, live performances and workshops, as well as doing a little networking when you’re queuing for tacos or coffee.

While the festival has three designated stands, there’s a lot of crossover between the interactive, film and music programming on offer. It’s the encounters and experiences in this Venn diagram that increasingly make SXSW a go-to event for everyone from a space-travel entrepreneur such as Elon Musk to ex-US vice-president Al Gore. This coming together of bright folks with smart ideas is one of SXSW’s biggest selling points.

Another, of course, is that SXSW Interactive is where now ubiquitous services such as Twitter and Foursquare initially made an appearance. The more successful those services became, the more SXSW was associated with social media in the eyes of many. Indeed, you couldn’t move at SXSW in the last few years for nascent social-media products vying for attention.

It’s telling that this isn’t the case this year, and other activities and memes are taking prominence. Here, then, are 10 ideas, highlights and trends from the first couple of days at SXSW 2013. And no, we didn’t download any new apps.

1 The makers Again and again, you caught a sense that physical products rather than digital were dominating the narrative. There were dozens of panels and talks on the maker movement or new gadgets and gizmos, while there was a big emphasis on the tools that will take this movement to the next level, such as 3D printers. Some panels, such as Embracing Analog, also looked at the emotional connection people place on physical objects, such as vinyl records, as opposed to their digital equivalent. Does anyone really love their MP3s?

2Downloaded The rise and fall of Napster is something that has had a huge effect on the tech and music folk who attend SXSW. It was apt, then, that Alex Winter ’s documentary on the people who crashed the music-industry party over a decade ago was premiered here. From Shawn Fanning and Sean Parker ’s initial revolution in how people could access music to the declaration of war by the recording industry, Downloaded has a fascinating story to tell and a colourful cast to tell it. Meanwhile, Metallica’s Lars Ulrich still doesn’t come out of the story well.

3 Elon Musk The South African-born entrepreneur (and the inspiration for Robert Downey Jr’s Tony Stark character in Iron Man ) has packed a lot into his life to date and there were huge queues for his keynote interview with Chris Anderson. The Paypal originator talked openly and enthusiastically about his work with SpaceX rockets, Tesla cars and SolarCity’s solar-power plans. It was an intriguing, engrossing, inspiring chat, with Musk portraying a nonchalant, laidback attitude to all of this cutting-edge work.

4 Data Data would feature very heavily in any SXSW word-cloud from the last week. Be it from how journalists should partner with geeks to make the most of data, to how established industries such as the music business are not tapping the potential in the data they already produce, data management and mining had a bit of a moment at SXSW.

5 Arrested Development The cult TV show is back in the game because of the upcoming fourth season after a seven-year break, so naturally the makers hopped on SXSW to make a splash about what’s ahead. The series’ creator Mitch Hurwitz was joined by actors Jeffrey Tambor (George Bluth ) and Will Arnett (Gob Bluth) to talk about the new series. Hurwitz said that while the return was initially planned as a movie, they found that telling the story of what the characters had been up to during the hiatus required more time, and that necessitated another TV season, which will be broadcast on Netflix in May. Two scenes from the new season were also shown at the Q&A.

6 Douglas Rushkoff After noting how he had been at SXSW in 1998 to talk about how futurists sucked, Rushkoff, who was at SXSW to plug his new book Present Shock , got stuck into his theories about how the present has become equally difficult. We’ve become experts at creating a “faux now” and procrastinating via technology and games rather than dealing with what’s going on in the real world. In many ways, Rushkoff suggested, we no longer live in the present tense and use our toys and tools to put that off for as long as possible. His advice for dealing with present shock? Turn stuff on and actually have a go at some face-to-face experiences.

7 Nate Silver Who said that statistics experts couldn’t pull a crowd? Nate Silver is the baseball nerd turned New York Times blogger who successfully predicted last year’s US presidential election results. As Silver explained in his presentation based around his new book The Signal and the Noise , such success was down largely to averaging polls and adding some of his own algorithms and weights to the equation. He also said that much of the success was also down to a lack of serious competition, something which certainly isn’t the case with sports.

8 Anonymous activism One of the most interesting and thought-provoking panels was on how anonymous communities were making the jump from online clicktivism to real-life protests and activities. Finn Brunton, Gabriella Coleman and Quinn Norton explored the roles and mindsets of loosely aligned organisations such as Anonymous and especially how anonymity could be used for activities other than hacking for kicks.

9 Solange There are thousands and thousands of bands in town for the music part of the festival and the race is on to anoint the next big thing from that mob. While these newbies have to jostle for attention and audiences with superstars such as Prince doing not-so-secret shows, there’s no doubt that some acts will enjoy a post-SXSW bounce. One of these is surely Solange Knowles, whose showcase at the Arlyn Studios on Sunday night last was proof of her star power. For fans of pop with soul, funk and a smashing off-kilter edge.

10 Journalism after Twitter While there was nothing to rival Twitter at SXSW 2013, there was plenty of talks that took their cues from using the social-media giant. Naturally, a lot of the media-focused bellyfluff examination had to do with tweets, and one interesting discussion featured some heavyweight news reporters and editors on what comes after Twitter when covering global news stories. In hindsight, the bones of their discussion were quite old-fashioned, with a great emphasis on finding trustworthy sources and verifying where those tweets and social media updates are coming from.

10 Teaching was Jerry Kiernan’s vocation; in 30 years he never missed a day