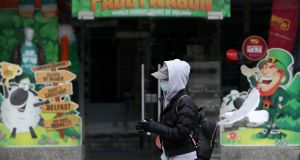 Parisa Zangeneh: ‘the Government should implement a debt holiday for the full duration of the emergency period.’ Photograph: Brian Lawless/PA Wire

In the past few weeks, the world has seen a health crisis take root that is unlike anything we have experienced in our lifetime.

It will remind some of the HIV/AIDs scare of the 1980s and 1990s. Yet even HIV/AIDs did not require quarantining one third of the world’s population.

Many of those in casual work arrangements, also referred to as the “gig economy,” have experienced financial, emotional, and physical instability, the likes of which we have not seen since the economic crisis of 2008. Many are students.

The Emergency Measures in the Public Interest (Covid-19) Bill 2020 has now been signed into law by the President, but does it go far enough to protect casual workers’ physical and financial security?

It prohibits landlords from serving notices of termination and from increasing rents during the period of emergency.

Additionally, individuals with parents and family members in care homes are still obliged to pay heavy fees to expensive facilities.

It should implement a debt holiday for the full duration of the emergency period.

This would entail prohibiting banks, landlords, and other places that offer people dwellings from collecting payment, which would provide a much-needed respite from the strain of the current hit to the economy. Moreover, it would aid people in avoiding something nobody needs right now: financial crisis.

Though the Emergency Measures Bill is a step in the right direction, the vulnerability of casual workers to the whims of the market has never been more apparent than right now.

Some - but not all - have the luxury of knowing that they can rely on their parents if they hit rock-bottom financially.

Their parents may be able to infuse some much-needed cash into their dwindling resources, or to offer a place to stay when students and others who may be hit by layoffs can’t honour their bills.

But this is a temporary solution to a larger problem: the lack of protection and job security that most casual workers have.

The precarious employment of low-wage, casual workers also highlights something that nobody wants to talk about: the class divide.

Many people, including students, are lucky to be able to work from home, but many who work in service industries cannot, while their employers can dispense of them as they wish.

In order to meet the needs of this segment of the Irish population, banks, landlords, and care homes should be prohibited from collecting mortgages, interest on mortgages, and rent until the health crisis is over.

This is the time to act for the greater good. Hopefully, society will wake up to realize that casual and low-income workers deserve as much job security and wage stability as anyone else, and hopefully they will realize it before the pandemic is over.

Parisa Zangeneh is a PhD student at NUI Galway.