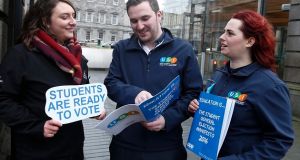 Issues surrounding funding of higher education, employment prospects for graduates and repealing the 8th amendment, are the three issues students are most concerned about.

The Union of Students in Ireland (USI) is confident turnout at the ballot box by its members will be boosted by the impact the 2015 marriage equality referendum had on how the political process is viewed.

Pointing to the May referendum on the thirty-fourth Amendment to the Constitution as an example of how the young can be engaged with the political process, Mr Donoghue said a recent voter-drive had taken his organisation by surprise.

“We registered over 10,000 people to vote in one day. We have never done that before. We’ve run voter-registration campaigns for a year that would have barely broken 10,000.”

Mr Donoghue said many of those who missed out on the opportunity to cast a vote on the marriage equality referendum will cast their vote for the first time in the upcoming election.

“The voter registration day we ran on October 6th was as clear an indication as you are going to get. Those people had missed the vote on marriage equality. They were registering for the general election.”

“We have registered tens of thousands more people than proportionally would have been registered in 2011 who are informed, who are active and who have seen what their vote can do in the last 12 months.

“They’ve seen the immediate effect of their vote. They believe they can change things by how they vote.

The USI has partnered with smartvote.ie, an online tool that allows users compare the views of candidates in their constituencies.

Mr Donoghue said issues surrounding funding of higher education, employment prospects for graduates and repealing the 8th amendment, are the three issues students are most concerned about.

Once the election is eventually called, Mr Donoghue said the USI will launch an information campaign. “We’re planning a roadshow where we will go from campus to campus for two weeks.”

It is also planning a last-minute registration drive in the run-up to the election.

“Then it will be about engagement -  about getting people out to vote. Making sure they do vote although we won’t be saying you should vote for this party or that party, just that you should vote.

Echoing the marriage referendum campaign, the union is running a motor-voting campaign where lifts and transport to voting centres will be organised.

Mr Donoghue said the union is working with unions to try and encourage lecturers to cover non-essential material on the day of the election “to allow students can get away to vote. “