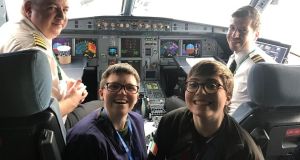 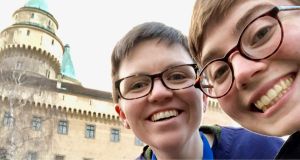 On landing in Budapest the second last clue was released. Initially we excitedly thought we were in the right country, Hungary, but it became clear we needed to head to Slovakia!

They previously outlined what it is and why they did it, here they tell us how it went.

“If we have to pick which part we’d pull out all the stops for, what would it be?”

We both looked at each other and knew the answer.

And so we did.

Our jailbreak journey started with the clear intention of aiming to raise the most money for the two Jailbreak charities: St. Vincent de Paul and Amnesty Ireland. We come from very giving families that always took part in fundraising and helping. In the lead up to the travel-race weekend, we reached out to every soul we knew, near and far, to companies and sponsors and the responses were immensely positive. Our people (both in Dublin and much further afar too) stepped up to the challenge with us.

Our trusted mascot, “Rocto”, a Rotunda knitted mini-octupus joined us from day one. Rocto represents the collective work of hard-working knitters who lovingly knit to provide a comforter for premature babies incubated in their early days post-delivery while adapting to this new world. Ourselves and Rocto joined forces to conquer the Jailbreak fundraising challenge and to make our way safely to the unknown Location X starting on Saturday 23rd February.

The day before it all kicked off was a busy one: On Friday morning Rocto tagged along to RCSI to support Fátimah presenting her research at the ICHAMS conference, followed by a huge bake-sale fundraiser in RCSI. We went about raising awareness and feeding hungry bellies. The Jailbreak safety talk that night in Trinity College set out the rules and got the excitement going, we had hearty dinners, packed our bags and got some sleep ready for the adventure.

We kicked off the travel-race early at 07:30 AM on Saturday morning, with our parents excitedly walking us to our fate in Dublin Castle. It was momentarily embarrassing, but we were silently chuffed for their presence and are so grateful for their unwavering support. We got to mingle with other teams, share the electric vibes and we had a few quiet moments that reminded us why we want to help people out. Amnesty works really hard to protect human rights, with current campaigns helping migrants and refugees feel welcomed in Europe. SVP Ireland work tirelessly to support families and communities across Ireland and An Cumann Gaelach fosters grá don Ghaeilge. With all that in mind, we lined up at the start line, ready to race across Europe to Location X. And we were off!

Our first clue lead us to Conradh na Gaeilge on Harcourt Street so with the first Dublin clue secured we were ready to hit the content, but first we needed a pee-stop. We swung into the RCSI campus on Stephen’s Green, which was flooded with anxious Leaving Cert student about to sit the HPAT - we wished them luck, both of us knowing the HPAT well! But we needed to get to the airport, ideally by taxi - would we just ask a taxi driver to bring us for free? Sure why not - and then we met Charles. As he dropped one young woman to the HPAT exam, we raced to him eagerly spilling our spiel and he kindly took us in. “Are you sure you’re okay taking us there for free?!”, we asked utterly surprised that our first cheeky request delivered. It almost felt too good to be true. Charles chatted with us and shared much life wisdom en route to Terminal 2. We chatted to all the airlines, scouring possible routes to central Europe, eventually calling in on one of our sponsors who made it happen. We were off to the city of tulips, Amsterdam. We managed to eat our mammy-packed cheese sandwiches and planned our next move.

While we waited for the flight we assessed the challenges that we needed to complete during the competition, and our possible routes out of Amsterdam once we landed. At the airport we gifted some deodorant to a stunned woman saying goodbye to her boyfriend, a random act of kindness (we realised we couldn’t bring compressed cans online), thus completing one of our challenges. Then we met Bill we hit another jackpot. His kindness and patience exuded across the table, and we asked if we might complete another challenge: teach someone some Irish. Amy taught him his first few Irish words, and he rowed in with his beautiful Scottish accent. Did we say he was patient? Oh boy he was patient, especially when Fátimah accidently deleted the Irish lesson video, and we had to do it all over again! He was a true star: Bill, thank you for teaching us patience.

On board EI608 to Amsterdam we popped into the cockpit with the pilot and the fabulous AerLingus flight crew facilitate us selling our story to the flight passengers. Our bucket received so many donations for the charities. Once we landed in Amsterdam, we were on the move again, and with the help of Mehmet we were on a train to Düsseldorf. We devoured a late lunch of left over pizza that Mammy had packed for us, and we got back to planning. On arriving in Düsseldorf we had no further clues directing us, and no suitable flights, buses or trains out, we decided to stay overnight and with some solid haggling, we were checked into a room ready to be clean, to sleep briefly and be ready for our next move.

A clue was released late Saturday night, a combination of latitude coordinates and hints, we had our work cut out for us. We built on the previous clues too and together we had narrowed our next step to four possible locations. A mix of gut-feeling and logic sent us to Budapest and so we woke up at 4am, very early to feed Rocto his delicious free hotel breakfast and get on the road (well, into the sky really). A rush to the airport and we were on a flight leaving Düsseldorf.

On landing in Budapest the second last clue was released. Initially we excitedly thought we were in the right country, Hungary, but it became clear we needed to head to Slovakia! We considered our options and felt hopping a bus to Bratislava would be best, though it was long (3 hours) and time was against us, with at least fifteen teams heading towards Slovakia, and five already in Slovakia. Half-way to Bratislava the last clue was released online, and for us it became a mad scramble to dash to Bratislava Airport, to rent a car and suddenly we were racing across Slovakian motorways to make it to Location X: Bojnice castle, a beautiful fairy-tale castle with romantic turrets and a gorgeous park adjacent to it. We were 50 minutes away when we learned that Team 14 had arrived - and won the race, and although disappointed, we were so chuffed for them, a win for one is like a win for all. Our motivation didn’t waiver and we arrived over 3 hours ahead of the deadline to the beautiful Bojnice castle as the 7th team to arrive. We were delighted to be in the top 10. More importantly, we were even more delighted that we raised nearly €6,000 for the two charities, more than any team has ever raised in the history of Jailbreak.

The Return Home and The Lessons Learned

Once we soaked in the immensity of what we had been part of, it was time to start the pilgrimage home. We rode a night bus to Budapest Sunday night and via Gatwick made our way home to Dublin on Monday. We were both ready to come home and celebrate with our family and friends. There is not a shadow of a doubt, that such a fundraising achievement would not have been achieved without the tireless and generous contribution of family, friends, our universities (The Royal College of Surgeons and Trinity College Dublin), our work colleagues, peers and especially our fairy Godfather. Thank you.

On our arrival home, Cathy and Jan let us ride with them in their taxi into town and again, reminded us that the power of kindness and generosity always wins over every situation. We chewed the ear off them with our adventure stories and hope our paths will cross soon.

We are so honoured to have been part of this adventure and grateful that we can help people out, now and in the future. Thank you to all and anyone, on every level for raising €6,000 with us for SVP and Amnesty.

In other news, Rocto will be hibernating in recovery after his big weekend, Fátimah returns to complete her second year of medicine and catching babies on the weekend, while Amy will be prepping tirelessly for her final medical exams (light a candle please).