The comedy is not a challenge to the status quo, but instead has a sociopathic indifference towards anything: love, betrayal or emotion 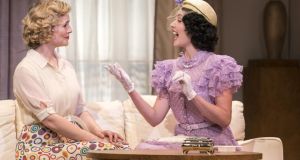 Tara Egan Langley and Caoimhe O’Malley in The Constant Wife

Constance Middleton, the lead character in William Somerset Maugham’s wearisome comedy of 1926, is meant to be a woman ahead of her time. Self-possessed, blithely jaundiced and as unflappable in a crisis as the wings of a dead sparrow, it’s hard to tell if she is now brought back to us as an icon of radical feminism or a smirking parody of it. (Either way, I wouldn’t expect a #WTF endorsement any time soon.)

Director Alan Stanford has shifted the play from the roaring mid-20s to the mewling mid-30s, perhaps to see how its comedy of manners and equal opportunities for infidelity between the sexes will fare in an era of full voting rights for women, but more likely, one suspects, for the lush benefits it affords to Peter O’Brien’s slinky costumes.

To a certain extent, we have a thoroughly modern Constance: she can’t indulge the social hypocrisy of feigning ignorance of her husband’s affair with her best friend, now the talk of the town. Eventually she upsets the smooth complacency of patriarchal carte blanche, ignoring her mother’s repetitive advice that men naturally stray so woman must naturally bear it. And ultimately she asserts her economic and social independence without ever dissolving her loveless marriage. All this, while carefully tending to a series of fetching little hats.

Constance’s way with words is alternately sub-Wildean, sub-Shavian and sub-Coward, but always subservient to Maugham, a writer seemingly allergic to pith, who merely requires a cipher. The modern wife “is a prostitute who doesn’t deliver the goods” she tells us, as unruffled as her printed Georgette dress with pleated bodice: “nothing more than a parasite”.

The comedy exists not in Constance’s challenge to the status quo, but her almost sociopathic indifference towards anything: love, betrayal, emotion. Faced with such an inert role, Tara Egan Langley delivers her lines in an unwaveringly wry tone with a permanent half-smile, manoeuvring - like everybody here - among Eileen Diss’s tasteful furnishings from one fixed pose to another, as though all performers had been subordinated to the needs of their costumes. (Stanford’s progamme note compares the play to a chess match, yet here they move only like rooks.)

There is some sprightliness to be found in Caoimhe O’Malley’s comic performance of the adulterous twit Marie Louise - angular, propulsive and seemingly in brisk exchange of “the goods” - and Simon O’Gorman’s clever take on the inconstant husband John, a nice-but-dim Etonian type in a perpetual state of bewilderment. These are compensations though to a central character who, as written, is inscrutable to the point of being invincible and is thus inconsequential. Constance’s idea of marriage, finally, is of something superficially attractive, insincere and entirely passionless. That, you feel, is also this production’s idea of theatre.