The world desperately needs the energy, work ethic and ambition that young people have to offer, writes Jade Wilson. 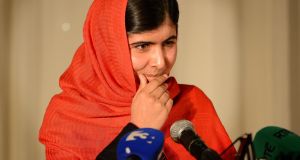 Malala Yousafzai joking while speaking on being presented with the Tipperary International Peace Award in Co Tipperary in 2013. Photograph: Eric Luke/The Irish Times

During the recent Seanad debate on the motion to allow 16-year-olds to vote in local and European elections, Senator Marie Louise O’Donnell passionately argued against the motion, telling teenagers “I would suggest that you stay away from politics and I would suggest you get on with your creative and imaginative lives.”

Senator Lynn Ruane disagreed with her remarks, responding “If you come from a background like mine, where political decisions that you don’t have access to literally shape your environment, without you being able to contribute to it, politics is very, very, very important.”

Having grown up in a similar socio-economic background to Senator Lynn Ruane, I am inclined to agree with her stance on this issue. Young people have the ability to dramatically shape their own future when they take an active interest in politics, which is particularly important for those growing up in disadvantaged communities, as Senator Ruane reiterated.

Being a member of Comhairle na nÓg throughout primary and secondary school was monumental for me. I had my first taste of politics from an extremely young age and it no doubt had a lasting impact. Had I brushed off or ignored politics throughout my early teenage years, there is no chance I would have been as eager and active as an eligible voter now. Comhairle na nÓg provides young people with the opportunity to discuss, debate and vote on issues that matter to them, and it provides an excellent insight into the democratic process.

What is the point in having a National Youth Council, a Minister for Children and Youth Affairs or a Minister for Education if not to actively engage and form partnerships with Ireland’s youth in order to hear and improve upon their concerns? As Sandra Meucci phrased it, “Rather than standing or speaking for children, we need to stand with children speaking for themselves.”

In her argument, Senator O’Donnell condescendingly laughed “Four years ago some of you were twelve.”

I doubt that the Senator would laugh at an eighteen-year-old who wants to register to vote and remind them of how they were twelve only six years ago. The point is, they’re not twelve anymore, and such a remark is simply invalid and counterproductive.

According to UN Youth, young people between the ages of 15 and 25 constitute a fifth of the world’s population, and Generation Z (those born between 1996 and 2010) have been characterised as the most liberal, educated and connected generation ever. We are digital natives, which ensures we remain up to date with social justice issues more than any generation before us. Growing up with the hectic backdrop of global recession, rapid climate change and the rise of terrorism, our main political agenda revolves around stability, equality and environmental preservation.

According to The Generation Z Report, we are the most fluid generation in terms of sexuality and gender, the most racially diverse, and above all, the most inclusive. Surely this is the cohort we want shaping our country.

Our fluidity and inclusivity makes us extremely eager to take action- our generation is expected to volunteer, protest, and donate to charity more than any other generation once we reach adulthood. In the meantime, we can no longer be shunned or ridiculed for disregarding traditional political structures and instead taking to Twitter or Facebook to express our political views, when it is clear in recent news that social media that can totally tilt the outcome of an election. Like it or not, it is one of the most powerful political platforms out there, and young people have the propensity to master it.

The truth is that the current political world desperately needs the energy, work ethic and ambition that young people have to offer.

Let’s not forget the Generation Z individuals who have already begun to shape the world, such as Malala Yousafzai. Yousafzai was chronicling her experience living in Taliban occupied Swat Valley for the BBC by the age of 12- the very age at which Senator O’Donnell insinuated people are politically incompetent. Yousafzai’s courageous campaigning for girls’ education, for which she was awarded the Nobel Peace Prize, led to many girls’ schools set up in Africa under The Malala Fund, long before she reached eligible voting age.

Teenagers like Jazz Jennings and Lily Madigan are making waves with their political activism. Madigan was the first transgender teenager to be elected women’s officer for the Labour Party in the UK, and Jazz Jennings set up TransKids Purple Rainbow Foundation which provides support for transgender youth.

More recently, high school students across The United States marched to pay tribute to the seventeen people who died in the Parkland massacre, and to use their voices to fight for gun control legislation.

These teenagers provide proof that young people are poised to change the world.

Regardless of whether teenagers under the age of eighteen are eventually made eligible to vote, to discourage them from being at all politically engaged is not only highly patronising, but also potentially damaging.

In the words of Alfie Kohn, “Children, after all, are not just adults-in-the-making. They are people whose current needs and rights and experiences must be taken seriously.”

Jade Wilson is a student of English and Drama at University College Dublin.

Graduating in a pandemic