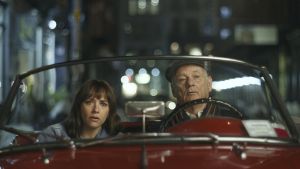 Film Title: On the Rocks

There are worse sins than allowing a director to coast smoothly through her favourite moves. Nearly 20 years after Lost in Translation, Sofia Coppola again casts Bill Murray as a reprobate escorting a younger woman about one of the world’s great cities. The dynamics are otherwise very different.

Felix (Murray) and Laura (Rashida Jones) are father and daughter. No emerging neophyte, Laura has a decent job in Manhattan and – or so she initially thinks – a solid marriage to busy Dean (Marlon Wayans, good in a rare non-comic role). Rather than making Ugly American noises at a foreign locale, the couple are moving about an upmarket New York that they know well.

Yet the film still feels like a less angular, more relaxed revisit to the Lost in Translation aesthetic. Less jetlag to The Jesus and Mary Jane, more hangovers to Chet Baker.

As the film begins Laura is having doubts about Dean’s faithfulness. He is away a lot and when he is at home he talks about work. There’s an annoying English girl in his firm who seems to crop up in every anecdote. Laura is minded to let it go until she makes the mistake of mentioning her concern to the recently reappeared Felix.

“Men are forced to fight and to dominate and to impregnate all females,” he says with a flat twinkle that only this actor can manage. Having ditched Laura’s mother when she reached a certain age, Felix feels the need to read his own bitter morality in the actions of every other man. He soon persuades Laura to join him in spying on the supposedly errant husband.

That reads like the plot of a mid-level Woody Allen film, and the delicious celebration of toffee-nosed Manhattan life would certainly appeal to that director. But Coppola has a lighter touch. The film is more about teasing out character dynamics than constructing elaborate gags.

For the first hour or so, the lovely cinematography, the perfect performances and the guilt-triggering embrace of excess is enough. As the film progresses, we yearn for more acknowledgement of Felix’s unapologetic misogyny. When he argues that he is now “deaf to the sound of female voices” he passes from charming rogue to full-on gender pest.

The last act feels like as if, short of a neat closing plot turn, Coppola compensated by just moving the cast to another location. None of these complaints can, however, dull the pleasure of seeing these two fine performers trade blows. Jones – exasperated, bewildered, ultimately resigned – is at least the equal of her older co-star.

Worth signing up to Apple TV just for the pleasure? Not quite. But it will eventually end up elsewhere.