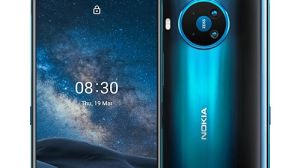 Where to buy: nokia.com

“The only gadget you’ll ever need” – that was the tag line for the Nokia 8.3 when the company announced it a couple of weeks ago. The new smartphone sits firmly in the mid-range when it comes to price, sacrificing some high-end features to hit that €470 tag.

It is Nokia’s first step in to the world of 5G handsets, and as first steps go, it’s a solid one. The eye-catching phone comes with a 6.8 inch display, a 64 megapixel main camera and a fingerprint sensor built into the power button. Powered by a Qualcomm Snapdragon 765G chip, the device has 6GB of Ram and comes with two years of guaranteed software updates. The Nokia phones also come with Android One, a pure form of Android that cuts out the bloat.

How the Nokia 8.3 will do in today’s smartphone market is anyone’s guess. The company has been putting out solid Android phones with a decent price tag for the past few years. The 8.3 is no exception.

The camera is a bit of a mixed bag. Although it has a quad camera, the results aren’t quite as impressive as I thought they would be. The main camera is 64 megapixels, but to access that resolution, you have to switch to Pro mode. As standard, the camera shoots 16 megapixel photos, which is more than enough for anyone really.

The standard photos are fine, with some good detail and colour, but the night mode, for example, isn’t quite as good as the Pixel’s Night Sight, for example.

You can shoot in 4K video at 24 frames per second, which should satisfy budding filmmakers. The phone has some interesting cinematic filters that can add lens flares or other effects to your video.

There are some sacrifices. For example, there is no wireless charging, which is nice to have but not an essential. But what may really hamper this phone is its timing. After postponing its launch to coincide with the delayed Bond film, Nokia is now facing into a busy time for smartphone launches. With Samsung’s S20FE, Google’s Pixel 4a 5G and the Pixel 5, and a potentially cheaper iPhone set to compete in that mid-range space, it’s a crowded marketplace. To cap it all off, No Time to Die has been shifted to next year. nokia.com