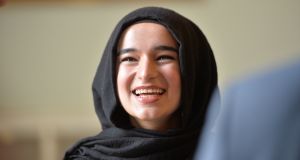 Suaad Alshleh, an 18-year-old Syrian refugee and medical student, was grabbing breakfast at her home in Dublin this morning when her phone pinged with an unusual message.

It was an email from the Royal College of Surgeons Ireland (RCSI) with a link to a video of European Commission president Ursula von der Leyen delivering her maiden state of the union speech.

In the address, the commission president spoke of the need to harness the skills, energy and talent of refugees in building a future for the EU.

“I think of Suaad, the teenage Syrian refugee who arrived in Europe dreaming of being a doctor,” von der Leyen said.

“Within three years she was awarded a prestigious scholarship from the Royal College of Surgeons in Ireland. ”

Von der Leyen urged members of parliament to think of what Alshleh and others had overcome and achieved when considering the EU’s capacity to manage the question of migration.

Watching on her phone, Alshleh could’t believe what she was seeing.

“It was crazy,” she says. “I showed my parents and they were over the moon; super-proud.

“I feel incredibly honoured and so happy and grateful to be able to represent RCSI, Ireland and Syria in this light.

“While I’m glad my hard work and dedication came to fruition, many other refugees haven’t been embraced and afforded the opportunities I have.”

Just a few years ago she was a 14-year-old asylum seeker who had just arrived in Ireland with dreams of becoming a doctor.

She and her parents had fled Syria in 2011 and relocated to the United Arab Emirates for a few years before seeking asylum with her mother in Ireland in August 2016. She was later joined by her father.

They spent nine months in a direct provision centre in Co Monaghan waiting for their papers, after which they moved to Portlaoise, Co Laois.

She studied at Mountmellick Community School – because her local school didn’t offer Leaving Cert chemistry – and had to rely on a lift from a neighbour because they didn’t have a car.

Alshleh also had to deal with being seen as an “alien” wearing a headscarf in communities which were not always used to diversity.

While her experience in direct provision was tough, she says she has nothing but praise for the support she has received since arriving in Ireland.

Her parents, mother Wesam Jouma and father Issam Alshleh - both engineers - beamed with pride when she secured enough points in the Leaving Cert to study medicine.

Last autumn, she was named as the first recipient of a new State scholarship for disadvantaged students studying science in higher education

“It’s a spectacular achievement, we’re so proud,” said her mother at the ceremony. “She worked her heart out, that’s it!”

Her parents have since moved to Dublin where they share a home with the medical student, who is their only daughter.

The 18 year old is now about to start her second year of medicine and dreams of working in surgery, but says it is early days.

Prof Cathal Kelly, the RCSI’s chief executive and registrar, said the Covid-19 crisis was transforming the delivery of healthcare and now, more than ever, talented young people were needed.

“Suaad is an extraordinary role model for aspiring doctors across the world and we were delighted that president von der Leyen chose to acknowledge her achievements in such a high profile way,” he said.

In the meantime, Alshleh hopes to inspire others to dream big, no matter what kind of barriers they face.

“Hopefully by shedding light on my story, more resources will be devoted to creating more success stories like mine,” she says.